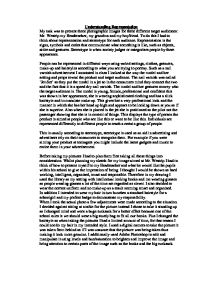 Understanding Representation My task was to present three photographic images for three different target audiences: Mr. Westrip my Headteacher, my grandma and my boyfriend. To do this I had to think about representation and stereotype for each audience. Representation is the signs, symbols and codes that communicate what something is like, such as objects, attire and gestures. Stereotype is when society judges or categorises people by there appearance. People can be represented in different ways using varied settings, clothes, gestures, make-up and hairstyles according to what you are trying to portray. Such as a nail varnish advertisement I annotated in class I looked at the way the model and her setting and props reveal the product and target audience. The nail varnish was called 'Jet-Set' so they put the model in a jet so in the consumers mind they connect the two and the fact that it is a speed dry nail varnish. The model and her gestures convey who the target audience is. The model is young, female, professional and confident this was shown in her appearance, she is wearing sophisticated clothing and has a slick hairstyle and immaculate make-up. ...read more.

Westrip I had to think of how to present myself to my Headteacher and what he would like the pupils within his school to give the impression of being. I thought I would be shown as hard working, intelligent, organised, smart and responsible. Therefore in my drawing I used the library as my setting with intellectual looking books and me wearing glasses as people wearing glasses a lot of the time are regarded as clever. I also decided to wear the correct uniform and no make-up as a result seeming smart and organised. In addition I intended to wear my hair in two bunches a standard hairstyle for a schoolgirl and my prefect badge to demonstrate my responsibility. When I took the actual photo a few adjustments were made according to the situation. I decided against sitting at a table for the picture instead I chose to take it standing up as I changed mind and wore a huge rucksack for a better effect because one of the school rules is we should wear a big sturdy bag to fit all our books. ...read more.

In the real photograph I compromised some things that were not possible like having flowers in the background as we did not have a place with flowers I held one. I changed my hairstyle due to lack of time and wore a pastel coloured fop with a white sleeveless button up top. With Photoshop I used selection and hue/saturation to make the trees and plants look more vivid. In the last picture I planned to take my image on a plain background because I didn't think the background would make much difference. I chose to have my hair partly covering my face and wear mascara to create an alluring image of me. I also decided to wear clothes that my body and accentuate the parts of my body I like and hide the bits I don't. In the definite photo I used levels and hue/saturation to enhance the image on Photoshop. In conclusion I learnt that representation and stereotype are important within media and how it is used. If I were to do it again I would pace myself during the practical and use my time wisely. ...read more.