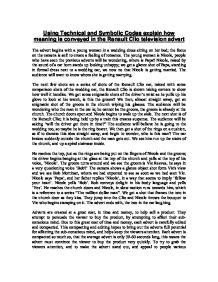 Using Technical and Symbolic Codes explain how meaning is conveyed in the Renault Clio television advert The advert begins with a young woman in a wedding dress sitting on her bed; the focus on the camera is soft to create a feeling of romance. The young woman is Nicole, people who have seen the previous adverts will be wondering, where is Papa? Nicole, raised by the sound of a car horn stands up looking unhappy; we get a glance shot of Papa, standing in formal dress next to a wedding car, we now no that Nicole is getting married. The audience will want to know whom she is getting marrying. The next few shots are a series of shots of the Renault Clio car, mixed with some comparison shots of the wedding car, the Renault Clio is shown taking corners to show how well it handles. We get some enigmatic shots of the driver's wrist as he pulls up his glove to look at his watch, is this the groom? We then, almost straight away, get an enigmatic shot of the groom in the church wiping his glasses. The audience will be wondering who the man in the car is; he cannot be the groom, the groom is already at the church. The church doors open and Nicole begins to walk up the aisle. The next shot is of the Renault Clio; it is being held up by a train this creates suspense. ...read more.

To try to grab the viewers attention, and to make the advert stand out, and appeal to people various techniques are used, such as: intertextuality, humour, music and various camera shots. To create the right atmosphere in which the sub-conscious can be affected. Intertextuality is used to create familiarity, intertextuality is the recycling of ideas, in which an idea is used that has been used is used again. For example Papa and Nicole, have appeared in early Renault Clio adverts, and have turned the adverts into a sort of ongoing soap, the viewers if they recognise this will wonder what is going to happen to them next. The second example of intertextuality, is the appearance of Vic and Bob a comedy duo from the show 'Shooting Stars', regular viewers of the show may already know how the advert will end, as Bob always get the better of Vic. Another example, occurs when Bob is begins banging on the glass yelling 'Nicole', this idea is taken from a film released in 1967, called 'The Graduate' starring Dustin Hoffmann, this will be recognised by middle aged viewers. Intertextuality makes the viewer feel, if they recognise it, fell cleaver, especially men. Humour is another device used in adverts; the producers hope that if the advert makes you happy or laugh, then these positive feelings will be transferred to the car. Humour is used in this advert in the silly voices, all the characters say, are each others names but in a very silly way, except bob who says 'yes' when Nicole shouts 'Bob'. ...read more.

This advert aims to make the car appeal to both men and women. It appeals to women in a number of ways: it is shown to be small, but spacious enough for children or shopping, it is easy to park (shown taking corners well) and is nippy. The advert also conveys a feeling of happiness, and has a happy ending, which will be liked by women. In addition, the final font, which is overlaid over the advert at the end, 'The New Renault Clio' is a very curvy, feminine font. It will appeal to men because they will recognise the intertextuality and feel clever, they will transfer these happy feelings over to the car, and be more inclined to buy it, as their attitude towards it will be more positive. The advert also seems to show that the Clio makes the owner more attractive to women, as Bob is chosen by Nicole in the end. I think this advert would be affective; I myself am a fan of Vic and Bob so the advert would appeal to me. The advert itself is not actually very funny, although it tries to be. I had not previously seen any of the other Papa and Nicole adverts or the graduate, so I would not have recognised the interextuality in that case. I think this advert would appeal to: fans of Vic and Bob, viewers of the previous adverts and people who had seen the Gradate. ...read more.