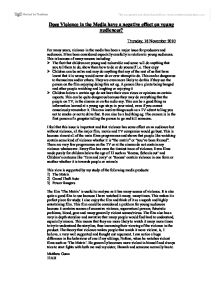 Violence in the Media

Thursday, 18 November 2010 For many years, violence in the media has been a major issue for producers and audiences. It has been considered especially carefully in relation to young audiences. This is because of many reasons including: > The fact that children are young and vulnerable and some will do anything that you tell them to do, show them how to do or do yourself i.e. They copy > Children can be na�ve and may do anything that any of the rest of us that have learnt that it is wrong would never do or ever attempt to do. This can be dangerous to themselves and/or others. They are even more likely to do this if they see the person on the film enjoying doing this act eg. A person like a pirate being hanged and other people watching and laughing or enjoying it > Children below a certain age do not have their own views or opinions on certain aspects. This can be quite dangerous because they may do everything that the people on TV, in the cinema or on the radio say. This can be a good thing as information learned at a young age stays in your mind, even if you cannot consciously remember it. ...read more.

The theory that violence makes people that watch it more violent, is, I believe, a very well supported and thought out argument. I can notice a huge difference in the behaviour of one if my siblings, Nathan, when he watches violent films such as 'The Matrix'. He generally becomes more violent in himself and always tries to start fights with both me and my sister, Hannah and someone normally has to end up being injured before he calms himself down and stops. Even then, he is still more violent that he normally is. Another product that could be considered a problem for young audiences is Grand Theft Auto. This is because it contains scenes of greatly excessive violence, gore, stealing, un-needed/unprovoked killing, running down pedestrians, killing cops etc. Although it has an 18 certificate, it still is owned by many people under the age of 18 such as my brother and me. My brother plays the game very often or watches me play it and I have noticed generally that video games containing violence have the same effect as TV and Cinema. I think that video games have more of an effect on people than film because in films you are not actually in the heat of the action and controlling the characters movements and actions. ...read more.

This can be very influential in later life especially if the child gets a career such as an army general and gets the idea that 1 friendly soldier can outfight 20 or 30 enemy soldiers! These messages and values are very often picked up without the child noticing and almost every programme that you watch from 'Eastenders' to 'Casualty' contain hundreds of messages and values. Overall, we can say that with the evidence of these three products, it can be said that violence in the media is acceptable but within reason. I think that all violence in the media should be 'policed' to take out any excessively violent sections or even films. I also think that there should be a clear and easy to see warning on all film's etc saying what the product contains whether it is pornographic material, violence or horror. I also think that violent video games should follow the same rules as violent films and TV Programmes, with the same policing and the same rules and restrictions. Finally, I think that messages and values should also be policed to check that dangerous or excessively violent messages and values are removed from media products. This should be especially important in products aimed at children or minors. Does Violence in the Media have a negative effect on young audiences? Matthew Gunn 11AH ...read more.