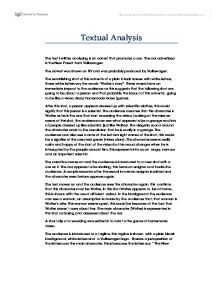 Textual Analysis The text I will be analyzing is an advert that promotes a car. The car advertised is the New Passat from Volkswagen. The advert was shown on ITV and was probably produced by Volkswagen. The establishing shot of this advert is of a plain black screen with white letters, these white letters say the words "Walter's story". These words have an immediate impact to the audience as this suggests that the following shot are going to be about a person and that probably the layout of this advert is going to be like a video diary/ homemade video (genre). After this shot, a person appears dressed up with scientific clothes, this could signify that this person is a scientist. ...read more.

The narrative moves on and the audience is introduced to a new shot with a car on it. The car appears to be shaking, this forms an enigma and hooks the audience. A couple seconds after the sexual innuendo enigma is solved and the character seen before appears again. The text moves on and the audience sees the character again, this confirms that this character must be Walter. In this shot Walter appears to be at home, this is shown with the use of different colour. In the background the audience can see a woman, an assumption is made by the audience that, that woman is Walter's wife. This woman seems upset, this could be because of the fact that Walter doesn't care about her. ...read more.

My prior knowledge tells me that this is stereotypical of Germans and also an ideology in this text (they are boring but build good cars). This advert follows Todorov (1912) theory that every media text follows a pattern. The equilibrium is at the beginning when Walter is happy. The disruption happens when his wife leaves him and the new equilibrium starts on the last scene, with Walter alone having a bath. A preferred reading was used in this advert to show that Volkswagen do everything well. The target audiences of this advert are English car buyers, mainly men. This is because the advert is selling a car and it was shown on ITV. My prior knowledge also tells me that in general men are more interested in cars than woman. ...read more.