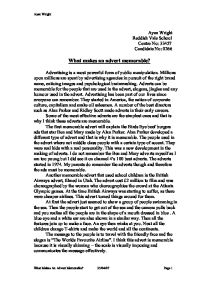 What makes an advert memorable?

Ayan Wright Reddish Vale School Centre No: 33457 Candidate No: 0266 What makes an advert memorable? Advertising is a most powerful form of public manipulation. Millions upon millions are spent by advertising agencies in pursuit of the right brand name, enticing images and psychological brainwashing. Adverts can be memorable for the people that are used in the advert, slogans, jingles and any humour used in the advert. Advertising has been part of our lives since everyone can remember. They started in America, the nation of corporate culture, capitalism and snake oil salesmen. A number of the best directors such as Alan Parker and Ridley Scott made adverts in their early careers. Some of the most effective adverts are the simplest ones and that is why I think these adverts are memorable. The first memorable advert will explain the Birds Eye beef burgers ads that star Ben and Mary made by Alan Parker. Alan Parker developed a different type of advert and that is why it is memorable. The people used in the advert where not middle class people with a certain type of accent. They were real kids with a real personality. This was a new development in the making of adverts. I do not remember the Ben and Mary adverts myself as I am too young but I did see it on channel 4's 100 best adverts. ...read more.

They found a man under a palm tree who was not a very good surfer and was afraid of the 40 ft wave he was about to face. The people try to represent what is going on in inside of the eye of the man and that is where the horses come in. The horses are symbolic. As soon as the advert starts there is an instant drumbeat. It reminds me of a beating heart or as if an important announcement is about to be made. When the ad first starts you only see a horse treading in the water and then you instantly think what is going on here? The voice over says "Ahab says I don't care who you are, here's to your dream." We then see the men entering the sea to catch this wave. Meanwhile the drumbeat is still going on. Next we see a man pouring a pint of Guinness. The voice over then says "Here's to you Ahab. The first drum hits the beat withal his heart...." Then we get back to the wave and you can see the horses in the waves clearly. Now you know why a horse was treading water earlier in the advert. We then stay with the men surfing this 40 ft wave. ...read more.

This is a r**e fantasy." Were sprayed on the poster. At first the advert was seen as too sexy yet a few days later it was described as "Beautiful, beguiling and photographic art.". It has been said that pictures of skinny clothed models promoting anorexia and bulimia are far more vulgar than seeing Sophie Dahl's healthy size 14 body. Many reviews in papers prove this. Myself I do not find this advert offensive yet it is not right that it is on billboards directly outside primary schools. The children would mature too fast and would not have fun like they should be at that age. I can also see why people could see the advert suggesting r**e as the pose Sophie Dahl is in is very passionate and does suggest s*x. The advert is memorable because of the amount of complaints it received. Some companies will even make an advert outrageous on purpose to get publicity, so that the advert and more so the product will be memorable. Basically adverts are memorable for many different reasons. It may be because they are funny or because they are unique in their own special way but just because an advert is memorable it does not mean that the product is. So next time, when you watch an advert just think if you will remember it, when you are older. By Ayan Wright 10VM ?? ?? ?? ?? Ayan Wright What Makes An Advert Memorable? 23/04/07 Page 1 ...read more.