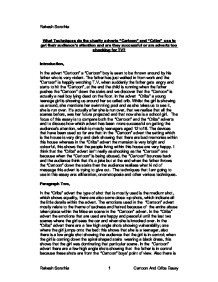 Rakesh Sorathia What Techniques do the charity adverts "Cartoon" and "Cribs" use to get their audience's attention and are they successful or are adverts too shocking for TV? Introduction, In the advert "Cartoon" a "Cartoon" boy is seen to be thrown around by his father who is very violent. The father has just walked in from work and the "Cartoon" is happily watching T.V, when suddenly the father gets angry and starts to hit the "Cartoon", at the end the child is running when the father pushes the "Cartoon" down the stairs and we discover that the "Cartoon" is actually a real boy lying dead on the floor. In the advert "Cribs" a young teenage girl is showing us around her so called crib. Whilst the girl is showing us around, she mentions her swimming pool and as she takes us to see it, she is run over. It's actually after she is run over, that we realise that all the scenes before, was her future projected and that now she is a school girl. The focus of this essay is to compare both the "Cartoon" and the "Cribs" adverts and to discuss how which advert has been more successful on getting the audience's attention, which is mostly teenagers aged 12 to16. ...read more.

Also there is a particular scene where the "Cartoon" boy is in the light and the father is in the dark; this shows that the boy is proven innocent whilst the father is guilty of abusing the child. I think that the camera angles used in both of these adverts are successful and do grab the audiences attention. Paragraph Three, In the "Cribs" advert the mansion is very glamorous and exotic showing that the people living within the mansion are very happy and lead a good life, the iconography used in the mansion is that; there are pictures on the wall of the girl's Grandmother, this shows that the girl is a teenager because of this picture. Also when the girl jumps on the bed shows that the girl is a teenager. The way the girl dresses show that she's a teenager and the way she talks, walks and acts also shows the audience that the girl is a teenager. This suggests that most people who are likely to get run over whilst getting distracted on the streets are most likely to be teenagers. In the "Cartoon" boy advert the house is very dark, unwelcoming and very dull. We know that the "Cartoon" was a boy because of all the toys on the floor and in the boys bedroom there are some posters of football players and the bed duvet, which was of some rockets. ...read more.

The music that is playing is R 'n' B so this indicates what most teenagers are into. In the "Cartoon" boy advert the shots are not as quick showing sadness and unhappiness. The movement by the "Cartoon" boy is unrealistic e.g. the boy bounces off the wall. But at the end the boy is seen to be dead when the father pushes the boy down the stairs. Conclusion The adverts are very successful, this is because when the "Cartoon" boy is seen to be a real boy at the end this really catches the audiences eyes and makes you feel sorry for the boy, I think that these sort of adverts are not shocking for television because the adverts get the right message across to the target audience which is teenagers, male and female aged 12-16. I think that the "Cartoon" boy is a more horrifying advert than the others because at first you see a boy in the figure of a cartoon and then when the boy is thrown down the stairs, the audience finds it more shocking. At first, the audience also thinks that the "Cartoon" boy advert is going to be funny but when the father starts to abuse the "Cartoon" boy, the advert is seen to be more u realistic. By Rakesh Sorathia ?? ?? ?? ?? Rakesh Sorathia 1 Cartoon And Cribs Essay ...read more.