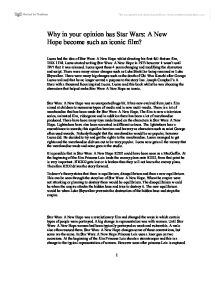 Why in your opinion has Star Wars: A New Hope become such an iconic film?

Luke Skywalker and Han Solo rescue Princess Leia. Many of the conventions of Star Wars: A New Hope are what we expect. There are also many new ideas and conventions in the film. The opening scene of the film uses space ships and lasers. This is something that is typically used in many sci-fi films. There is then a battle in the space ship with laser guns, another convention of sci-fi films. However Star Wars: A New Hope often drifts from the convention of sci-fi films. One way that the film does this is the use of women in the film. Princess Leia uses a gun in the film. This does not agree with the stereotype of women at the time, women were thought to be weak and vulnerable. Also by princess Leia taking the gun from Luke Skywalker this shows a male to be weaker than a female in this case. Men were often thought to be physically stronger and better at fighting than women. This would not have been an expected convention in the film. Despite this Lucas changed the convention that women were weak. This may have helped the film to be so iconic as many remember that Princess Leia took the gun from a male character. This may also be an influence to many women at the time, this may have shown them to stand up for themselves, despite the mixed pinions about them and their rights. Princess Leia's character may have attracted many women to see the film as she was a role model to them throughout the 1970's. A typical setting for a sci-fi film would be in space and in a space ship. This is where most of the film is based and Lucas has stuck to the convention of setting. At the beginning of the film the scroll reads "In a galaxy far far away". This sets the scene to a place that the audience do not recognise. ...read more.

This shows the dangers that Luke Skywalker faces; this shows that he is brave and courageous. Lucas then uses a medium shot to show Luke Skywalker swinging from one side to another. In the final battle of Star Wars: A New Hope Luke Skywalker drives a X-Wing ship to try and stop the Death Star destroying any more planets. Lucas uses a camera angle that is on the front of one of the X-Wings; this makes the audience feel as if they are there in the X-Wing. This make the audience more engaged with the film and introduces a sense of realism of the events taking place. Lucas also uses many medium shots to show the ships fighting and shooting each other. This makes the audience aware of the location of the ships and what is going on. A close up shot is used to show the fear of the people driving the X-Wings. This shot makes the audience realise that there is a lot of fear for the people driving the X-Wing and that they might die. A close up shot is also used to show the relief that Luke Skywalker has when Han Solo saves him from being killed and sends Darth Vader spiralling away. The fighting takes place in trench like holes. This could pay homage to the world war soldiers; the characters show that the world war soldiers were brave and courageous. In conclusion, Star Wars: A New Hope is a very iconic film. It is immediately recognisable throughout the whole world and has changed many films today. It could have also helped women get the equal rights in the 1970's; therefore it could have changed the way that we know the world today. It was so iconic due to the amount of people that went to see it and the special effects that were ahead of its time. It was down to Lucas, Dykstra and the audience that went to see Star Wars: A New Hope that made it so iconic. 1 ...read more.