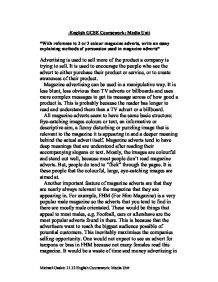 -English GCSE Coursework: Media Unit "With reference to 2 or 3 colour magazine adverts, write an essay explaining methods of persuasion used in magazine adverts" Advertising is used to sell more of the product a company is trying to sell. It is used to encourage the people who see the advert to either purchase their product or service, or to create awareness of their product. Magazine advertising can be used in a manipulative way. It is less blunt, less obvious than TV adverts or billboards and uses more complex messages to get its message across of how good a product is. This is probably because the reader has longer to read and understand them than a TV advert or a billboard. All magazine adverts seem to have the same basic structure: Eye-catching images colours or text, an informative or descriptive aim, a funny disturbing or puzzling image that is relevant to the magazine it is appearing in and a deeper meaning behind the actual advert itself. Magazine adverts tend to have deep meanings that are understood after reading their accompanying slogans or text. ...read more.

This in itself is a simple phrase and it is aimed to say that most middle-aged women who have a lot of time on their hands who are reading this advert, that just half an hour will enable them to be up-to-date with computers. Many women, especially the more older ones, feel that with the need for knowledge of computers becoming more and more necessary these days, that a computing course or half an hour tutorial would be very beneficial to them. Above the picture is another woman; this is probably the relative in Australia who the woman with the baby is sending the picture to. The pun of words on 'Sydney' and 'Sidney' are very effective because people like puns and they tend to stick in the mind as they make you stop and think about its meaning and this makes it a very effective use of advertising. The image is a very nice image because the bay may seem "cute" to the mainly women readers, and they may find this image warm and comforting. So, it would be an eye-catching image for readers who are just flicking the pages. ...read more.

This means that the advert is successful. It is in a natural setting so the green colours stand out very well. It is obvious that this advert is ideally placed in this magazine. Childcare would mostly be aimed at mothers of who might need it. This magazine is aimed at middle-aged women who might have a lot of time on their hands. Therefore, they would have time to enquire about childcare and would probably need it for when they are going out. The advert is trying to suggest that this service is easy to use and is very informative so anyone can use it. This is represented by the fact that they are using a figure of which one would associate with children's toys and the use of the phrase "Child's play". It is reminding the women of their childhood and how they were carefree. They would want to return to this by sorting out their problems, such as childcare. Overall, these adverts are very common to the magazine that they appeared in. They show the characteristics that one would most commonly associate with magazine adverts, such as bold striking images, bright colours and catchy, rememberable slogans. They are also relevant to the magazine they appeared in. ?? ?? ?? ?? Michael Gaskin 11.12 English Coursework: Media Unit ...read more.