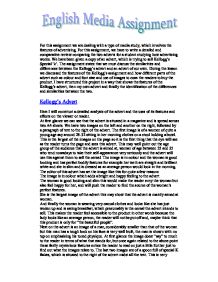 Write a detailed and comparative review comparing the two adverts for a student studying how advertising works. We have been given a copy of an advert, which is trying to sell Kellogg's Special 'k'.

For this assignment we are dealing with a type of media study, which involves the features of advertising. For this assignment, we have to write a detailed and comparative review comparing the two adverts for a student studying how advertising works. We have been given a copy of an advert, which is trying to sell Kellogg's Special 'k'. The assignment states that we must discuss the similarities and differences between the Kellogg's advert and an advert of our own. During the lesson we discussed the features of the Kellogg's assignment and how different parts of the advert such as colour and font size and use of images to coax the readers to buy the product. I have structured this project in a way that shows the features of the Kellogg's advert, then my own advert and finally the identification of the differences and similarities between the two. Kellogg's Advert Here I will construct a detailed analysis of the advert and the uses of its features and effects on the viewer or reader. At first glance we can see that the advert is situated in a magazine and is spread across two A4 sheets. We have two images on the left and another on the right, followed by a paragraph of text to the right of the advert. The first image is of a women of quite a young age say around 28-32 sitting in her morning clothes on a stool holding a bowl. This is the largest of the images on the page so it is the first thing that the eye will see as the reader turns the page and sees this advert. This may well point out the age group of the audience that the advert is aimed at, woman of age between 25 and 35 who tend nowadays to take their self-appearance very seriously and the advert will use this against them to sell the cereal. ...read more.

to the top of that page, using the natural instinct of the eye to go to the top of the following page when reading, which then ... Brings us to the next "base" where there is another title/quote then this leads you down To the large capital "N" starting off the block of text the eyes read through this quite oblivious to the mapping system going on Leading all the way down to the final caption and a finishing image to fixate in the readers mind...Amazing! And there you have it, moving back to the main bulk of text; this paragraph contains the main detail that the customer/reader needs to know, but would not instinctively stop to read while reading the whole magazine, even though if the reader may want the product, if they read the details their eyes do not recognise this while glancing at the page. Moving on to analysing the text itself; the entire paragraph is addressed to the reader personally like a one to one conversation, this adds familiarity between the reader and the woman in the advert, a very informal vocabulary is used with words such as "beefcake" and "dream boy", and the subject of the text is associating the cereal with setting up a perfect relationship with a woman's ideal man, by gaining the apparent impossible, and I quote, "a figure that's irresistible". Further more as I read deeper into the text, a kind of friendly relationship is built up between the reader and the woman in the article and then some sentences, that are said soon make sense of the once mysterious images, like the picture of the man on the fridge; we soon understand that the picture is there to stop the woman "pigging out" because the image reminds her of her prize at the end. It states, "A splash of ice cold milk on a bowl of Special K is a pleasure not a chore" this has a great effect on the reader because everyone knows, that dieting and eating healthy just seems like hard work. ...read more.

Both adverts include a logo at the end of the advert so to speak, and this is a shared feature, they will both want the same result, this is for the reader to remember the name of the brand over all so at least if the name is remembered then all the details will follow when the person sees the name again. Both scenarios are "perfect" all the place is tidy and matching in the MFI advert, and the same in the other not that there is much to be messy but the people are all clean, hair done brilliant smile etc, this adds to the attraction and also allows the reader to associate themselves with these people via the product. In both the adverts the positioning of the wording has to be just right, this especially true in the Kellogg's advert as I had identified that mapping theory, this would not be effective at all if the wording was not correctly positioned and also in the MFI advert, if the text was bang in the middle then that would spoil the view of the immaculate bedroom which is the MFI adverts key feature for attracting readers. So the text is place in the corner out of the way giving the main image plenty of space to be recognised. Conclusion So now after analysing two separate adverts we can get quite a clear image of how advertising works and how all its little features add up to successfully sell their product to the wide range of viewers out there, of course there are many different ways of selling a product and to be sure, we have only covered a small amount of the advertising world but from this assignment we have certainly understood how advertising works and the many ways there are to sell something and the many ways people can play with your mind to make you want what they are selling. ...read more.