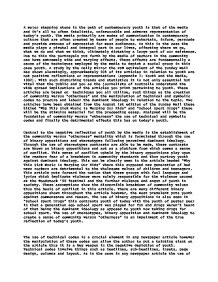 Youth and the media

A major stepping stone in the path of contemporary youth is that of the media and it's all to often fatalistic, unfavourable and adverse representation of today's youth. The media primarily are modes of communication in contemporary culture that are often created by teams of people to entertain, inform, persuade and provide avenues of expression for mass audiences. As this is the case the media plays a pivotal and integral part in our lives, affecting where we go, what we do and what we think, ultimately dictating a large part of our existence. Due to this the portrayals put forth by the media of sectors in the community can have extremely wide and varying effects. These effects are fundamentally a cause of the techniques employed by the media to depict a social group in this case youth. A study by the Daily Mirror the NSW equivalent of The Sunday Mail Has shown alarmingly, approximately 90% of its articles in relation to youth are not positive reflections or representations (appendix 3: Youth and the Media, 1992). With such disturbing trends and statistics it is not only essential but vital that the public and you as the journalists of Australia understand the wide spread implications of the articles you print pertaining to youth. ...read more.

As is the case in any newspaper article the use of headlines in this article have been used to grab the attention of reader. Both articles were situated in the centre of the paper and were placed on the top left hand corner of even numbered pages, meaning they were the first thing seen on a page turn. This coupled with the fact they were both accompanied by photographs one of which was colour also added to the amount of attention received. The article "Why This Sick Music Is Warping Our Kids" also contained a shaded inset which contains bold font for each point. This article also makes use of a different font, italic when quoting thus drawing attention to this part of the text. The photographs in each case have been used to reinforce the message of the article in that they support the reporters point of view as the content of the photographs are in both articles somewhat shock related and sensationalised they add to the conflict of community versus "otherness". The photograph in "School Sport Drugs" gives only a head shot this allows the reader to focus on the facial expressions of the subject. ...read more.

This labelling is detrimental as it means that youth are typecast no matter how far from the truth this may be. This scenario leads to many social problems such as crime and youth unemployment. It is no coincidence that these two social problems are also the most covered by the media, so it is evident that there is a vicious cycle. This stereotyping is also based on limited fact and it is common knowledge that very few people come close to an actual stereotype as the broad range of humanity covers such a vast spectrum. The sensationalism these articles are based on I believe became ironically unstuck in the article "Why This Sick Music Is Warping Our Kids" when the expert psychologist said "Studies have been undertaken but nothing has been proved." This took the impetus from the whole article. However, in saying this not all media coverage is pernicious, although this is at a bare minimum. There a several ways the media should accommodate the problem of youth in the media, firstly cut down on negative publicity, secondly try to declassify youth and concentrate on their achievements and thirdly let youth speak, especially on issues pertaining to them. ?? ?? ?? ?? 3 3 ...read more.