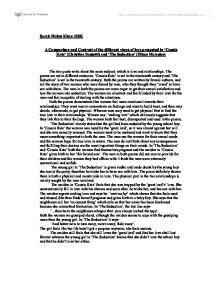 Sarah Mahm Khan 10SK A Comparison and Contrast of the different views of love presented in 'Cousin Kate' (Christina Rossetti) and 'The Seduction' (Eileen McAuley) The two poets write about the same subject, which is love and relationships. The poems are set in different centuries. 'Cousin Kate' is set in the nineteenth century and 'The Seduction' is set in the twentieth century. Both the poems are written by female authors, and tell the story of two women who were forced by men, who they thought they 'loved' to have s*x with them. The men in both the poems are more eager to get their s****l satisfaction and lure the women into seduction. The women are reluctant and feel blinded by their love for the men and feel incapable of dealing with the situations. Both the poems demonstrate that women feel more emotional towards their relationships. They want men to concentrate on feelings and want to build trust, and then may decide, afterwards, to get physical. Whereas men may need to get physical first to find the true love in their relationships. Women say- 'making love' which obviously suggests that they link this to their feelings. The women both feel hurt, disrespected and used in the poems. 'The Seduction' clearly states that the girl had been seduced by the young school boy. In 'Cousin Kate' the woman was lured by the 'great lord', so it was almost against her will and she was s******y aroused. The women want to be nurtured and want to know that they mean something important to both the men. The men use the women for their s****l needs and the women hope for true love in return. The men do not think about any consequences and fulfilling their desires are the most important things on their minds. In 'The Seduction' and 'Cousin Kate' both the women find themselves pregnant and the maiden in 'Cousin Kate' gives birth to her 'fair haired son'. ...read more.

My fair haired son, my shame, my pride, cling closer, closer yet.' The maiden tells us that her fair haired son is the son of the 'great lord'. Her cousin Kate cannot have children, and the fact that she has a son, is even better because in those times people thought that sons were 'better' and that they would make the family proud. 'Your father would give lands for one to wear his coronet'. This last sentence makes Cousin Kate feel bad about the fact that the maiden has a son and that she does not. This shows the strength of the maiden and the weakness of her cousin Kate, the fact that in this situation, it was really the maiden, who 'won'. 'The Seduction' tells the story of a young girl who was seduced by a young school boy to have s*x with her. The poem starts- 'After the party, early Sunday morning, he led her to the quiet bricks of Birkenhead docks'. After the party, this is telling us that she must've been tired. 'He led her', in other words, he lured her, he may have forced her to come with him or he gave her the impression that he was looking after her. This is just like what happened in 'Cousin Kate'- 'He lured me to his palace home', he tricked her. The next stanza starts off- 'He sat down in the darkness'. It was dark, he may have been comforting her, it creates a seducing and uneasy atmosphere. "He handed her the vodka, and she knocked it back like water, she giggled, drunk and nervous, and he muttered 'little slag'". This is telling us that he gave her vodka to make her feel not her normal self. She was feeling anxious and unsure, so she took it, he then muttered 'little slag', this obviously isn't indicating love, he just wanted to use her to have s*x with. ...read more.

In 'The Seduction', we are given very precise details as to how everything happened, we do not have to use our own imagination as much. 'Cousin Kate' is more of a short, moving piece of poetry, I don't think the poem is asking the reader to sympathise, but is asking them to understand and imagine that they are in the maiden's shoes. In 'The Seduction' the reader feels a lot of sympathy for the young girl because she seems so confused and lost in her life. Both the women have had their names blackened and people look down upon them because they committed fornication. The maiden in 'Cousin Kate' still loves the 'great lord' and is proud to have his child and feels as if she has achieved something from the relationship. Whereas the girl in 'The Seduction' knows that the young boy did not love her and that she did not love him, she feels absolutely useless and feels very negative about the whole situation whereas the maiden looks towards the positive side. The maiden has built inner confidence and belief in herself. I feel as if 'Cousin Kate' portrays the feelings of love, relationships and betrayal in a very good way. This poem lets you open up your own imagination and lets you think for yourself that is why it is effective. The reader feels as if they are the maiden, the poem shows how the maiden felt like when she was in love with the 'great lord'. He had s*x with her and then never bothered to see her again and lost interest. She felt very hurt and useless until she had her son. The 'great lord' fell for the maiden's cousin Kate because she was 'good and pure'. The maiden now feels confident and proud. The poem also gives the feeling that it may have been a true story because of the first person narrative, therefore makes the reader think about it; this is how it is very effective. ...read more.