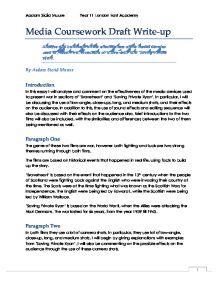 Analyse and comment on the effectiveness of the media devices used to present war in sections of Braveheart and Saving Private Ryan.

In addition to this, the use of newsreel camera man shots make it look like the viewer is looking through the eyes of the soldiers themselves, which is an effective tool as it makes the viewer feel as if they are at that specific place. In 'Braveheart' the use of close-ups gave the viewer a chance to see the expressions on the faces of the soldiers, which is almost like an insight into their inner feelings letting the audience see exactly what the soldiers felt like. Long shots were used in 'Saving Private Ryan' to show the vast number of people coming together to fight for the sake of their countries with no hesitation in their minds. One of the possible effects on the audience through the use of this media device is that the audience realises that even though the people on screen are normal people, they had a strong will which was so strong that it made large crowds of people committed to their cause. ...read more.

A modal example for this is 'Rambo', a film which greatly glamorises war. Furthermore, the films both use deception in them as a technique to grab the attention of the audience, and put them on the edge of their seats waiting in tension to see the outcome of the film. I will now attempt to inform you of the differences between the films. I will do this in the same manner in which I have discussed the similarities. In 'Braveheart' the forms of weapons and artillery are different when compared to those in 'Saving Private Ryan'. This is because 'Braveheart' was set in the 13th century, whereas 'Saving Private Ryan' was set in the 20th. Conclusion In conclusion I would like to state that both films used their techniques effectively with the wanted effect imposed on the audience. Also, that the use of the camera shots was cleverly organised as they clearly let the audience know what was going on in every one of the scenes in both films. Also, the realism made the films seem more appealing as it made it seem as though it was the complete truth. ?? ?? ?? ?? Aadam Siciid Muuse Year 11 London East Academy ...read more.