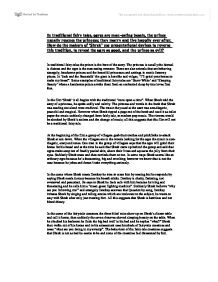 Analysis of Shrek the film

In traditional fairy tales, ogres are man-eating beasts, the prince usually rescues the princess; they marry and live happily ever after. How do the makers of 'Shrek' use presentational devices to reverse this tradition, to reveal the ogre as good, and the prince as evil? In traditional fairy tales the prince is the hero of the story. The princess is usually the damsel is distress and the ogre is the man-eating monster. There are also animals that are behaving strangely, handsome princes and the beautiful princesses and settings in exotic faraway places. In 'Jack and the Beanstalk' the giant is horrible and vulgar, "I'll grind your bones to make my bread". Some examples of traditional fairy tales are 'Snow White' and 'Sleeping Beauty' where a handsome prince awoke them from an enchanted sleep by true loves first kiss. In the film 'Shrek' it all begins with the traditional "once upon a time". When Shrek told the story of a princess, he spoke softly and calmly. The pictures and words in the book that Shrek was reading out aloud were medieval. The music they used at the start was non-diagetic, peaceful and magical. However when Shrek ripped a page out of the book and used it as toilet paper the music suddenly changed from fairly tale, to modern pop music. The viewers would be shocked by Shrek's actions and the change of music; all this suggests that this film will not be a traditional fairy tale. ...read more.

This shows that Shrek is funny and likes to joke around. Farquaad is a coward; he intends to rescue the princess by sending knights to do the job for him. He's cruel when he orders the knights to "get that out of my sight". Farquaad puts a knife to Fiona's neck when she changed after sun set, and threatens to lock her up. In some ways Shrek behaves like a traditional hero when he saves Princess Fiona. He is brave and courageous when he was fighting the dragon and fast when he was running away from the fire. Shrek is cunning and intelligent when he got the chains tangled up and then put a sword in between them, and finally he is noble and protects others before himself when he saves Donkey from fire by pushing him out of the way. But in other ways he behaves in the opposite way to a traditional hero and more like a rough ogre. Instead of climbing up into the princess's room he fell though the roof of the room, Shrek then wakes Princess Fiona by shaking her not kissing her. The princess wants Shrek to be romantic because she thinks that Shrek is her true love. She offered Shrek a hanky as a token of gratitude but Shrek just uses it to wash his face. The excuse that Shrek gave for not killing the dragon was that is was on his "to do list"; the real reason was that he didn't want to kill the dragon. ...read more.

At the first glimpse of Lord Farquaad there is dramatic organ music that makes us feel excited and curious, this suggests that something important is about to happen. A female choir sings delicate music when Shrek is in the top most-tower because it makes it romantic. When Shrek is in the dragon's castle rescuing Princess Fiona, loud dramatic music is used; the effect this creates is suspense and drama. Slow music is used when Shrek overhears Fiona and Donkey and misinterprets their words because Shrek is upset. A song about broken dreams and promises is played when Shrek returns home. He looks heart broken especially when he sees Donkey and Dragon cuddling. After analysing the characters of Shrek and Lord Farquaad, I have come to a conclusion. Although in some ways Shrek appears like a traditional ogre, you think Shrek is different to one because he jokes around and doesn't kill or hurt anyone. Although Lord Farquaad looks like a lord and seems to be in place of a prince, his actions suggest that he is evil. For example when he was torturing the ginger bread man for information and sending knights to rescue the princess instead of himself. The story of Shrek uses presentational devises to reverse our expectations. Like when Shrek is in the meadows with Fiona, they make the lighting bright because it's a joyful part of the film and they use low angle shots on Lord Farquaad to make him look intimidating. In summary, Lord Farquaad, Princess Fiona and Shrek are unlikely characters in a traditional fairy tale. ...read more.