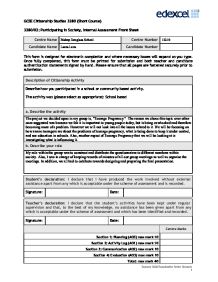 GCSE Citizenship Studies 3280 (Short Course) 3280/02: Participating in Society, Internal Assessment Front Sheet Centre Name Bishop Douglass School Centre Number 12210 Candidate Name Laura Luca Candidate Number This form is designed for electronic completion and where necessary boxes will expand as you type. Once fully completed, this form must be printed for submission and both teacher and candidate authentication statements signed by hand. Please ensure that all pages are fastened securely prior to submission. Description of Citizenship Activity Describe how you participated in a school or community based activity. The activity was (please select as appropriate): a. Describe the activity The project we decided upon in my group is, "Teenage Pregnancy." The reason we chose this topic over other ones suggested was because we felt it is important to young people today, but is being overlooked and therefore becoming more of a problem. However we will not look into all the issues related to it. We will be focusing on how aware teenagers are about the problems of teenage pregnancy, what is being done to keep it under control, and sex education in schools. Also, another aspect of Teenage Pregnancy that we will be looking at is investigating what is influencing it. b. Describe your role My role within the group was to construct and distribute the questionnaires to different members within society. Also, I was in charge of keeping records of minutes of all our group meetings as well as organise the meetings. In addition, we all had to cotribute towards designing and preparing the final presentation. Student's declaration: I declare that I have produced the work involved without external assistance apart from any which is acceptable under the scheme of assessment and is recorded. Signature: Date: Teacher's declaration: I declare that the student's activities have been kept under regular supervision and that, to the best of my knowledge, no assistance has been given apart from any which is acceptable under the scheme of assessment and which has been identified and recorded. ...read more.

The reason we surveyed students and not teachers as well was because, young people truly have the answers and information we are trying to gather. Also, one of our goals was to see how aware young people are of "Teenage Pregnancy" and the only way to find this out was to survey the main people involved, that being the youths of today. This could be classed as a citizenship issue, as it involves the people of the society and getting their opinion. Also, when creating the questionnaire, the questions had to carefully be structured, to allow the respondent to fully understand the question asked. During the preparation of the interview, we thought about who we should interview and why. We decided that an adult would be best to interview because we already would have opinions of young people from the questionnaire distribution. We came to the conclusion that the best adult to interview would be an adult who has to deal with the problem daily and therefore someone who is involved somehow in advising teenagers on the problem. Using this, we decided upon a Health Advisor, who has to deal with this daily. This also shows evidence of citizenship issues as it again involves talking to real people. It also proves the usage of citizenship issues because we are gathering information about real life situations going on in society around us. All types of data collection involved citizenship issues. We had to think about ethical issues when interviewing people and also when using information from newspapers. Also, the usage of pictures was also addressed by citizenship issues. This was because we had to be made aware of things like copyright and using secondary information correctly. Finally, using all the information we gathered, we created a final presentation which will directly affect young people in society. In my opinion, this is the activity that showed most citizenship issues, as it impacts society and also, to obtain this final project, citizenship was used majorly and many citizenship issues were addressed. ...read more.

This was proven in the results of the interview, they were very thourough and contained exactly what we needed. However, i believe Paris could have been more involved for the rest of the project, although she produced the leaflet in Microsoft Publisher, she could have contributed more in other aspects of our topic. Stephen Buns was mainly in charge of colelcting data for our presentation. He had succesfully completed this task, always providing us with very useful infromation. He stuck to deadlines very well and I believe he has put a mojor effor into this topic. He was very eager to get the work done and also he had proved that he can be very realiable. Also, his English skills were shown in the editing of the leaflet. He has edited a lot of the leaflet making it very successful in the end. This was important because we wanted to make sure our leaflet was clear enough for anyone to understand in order to give good results in helping the young people of society. Stephen should improve on the way he adresses different people in society and the way he advises them because at times we felt Stephen was being too blunt. Michael Devoli played a big part in our group as well, he made sure he collected all the best information and carefully selected only the relevant facts and statistics from internet resources. He done this successfully and this was shown in the production of the leaflet were the facts and statistics he had recorded were very found extremley useful for the young population. Also, Michael had the very importatnt job of implementing the information needed onto the leaflet template. I believe Michael made a fairly good effort overall, but could have been a bit more talkative. Also, i believe he could have gotten involved in talking to people in society more in order to spread his infromation collection. His confidence was too low for the acitivity but he tried his hardest. ?? ?? ?? ?? Summer 2006 Examination Series Onwards 1 ...read more.