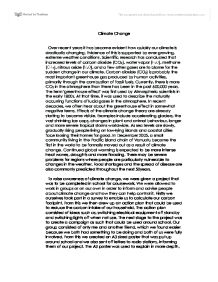 Climate Change Over recent years it has become evident how quickly our climate is drastically changing. Evidence of this is supported by ever growing, extreme weather conditions. Scientific research has concluded that increased levels of carbon dioxide (CO2), water vapor (), methane (), nitrous oxide (), and a few other gases are to blame for the sudden change in our climate. Carbon dioxide (CO2) is probably the most important greenhouse gas produced by human activities, primarily through the combustion of fossil fuels. Currently, there is more CO2 in the atmosphere than there has been in the past 600,000 years. The term 'greenhouse effect' was first used by Atmospheric scientists in the early 1800s. At that time, it was used to describe the naturally occurring functions of lucid gases in the atmosphere. In recent decades, we often hear about the greenhouse effect in somewhat negative terms. Effects of the climate change theory are already starting to become visible. Examples include accelerating glaciers, the vast shrinking ice caps, changes in plant and animal behaviour, longer and more severe tropical storms worldwide. ...read more.

The next stage to the project was to create a campaign as such that could be used around school. Our group consisted of only me and another friend, which we found easier because we both had something to be doing and both of us were fully involved. From this we created an A3 sized poster that was put up around school and we also sent off letters to radio stations, informing them of our project. The A3 poster was used to explain in more depth, the causes, effects and some of the solutions to climate change. Brightly coloured photographs of the sun and the universe were used to attract people to read our poster. The letter we produced was sent to a selected range of radio stations, for example Radio 1 and Heart Fm. A copy of the letter is attached to this essay. The impact of my project succeeded in more ways than one. This was because my family has started to follow my action plan which as a whole will all around lower my carbon emissions produced in my household. ...read more.

If a big enough effort was put in from some of the bigger countries I think that we could tackle some of the effects of global warming. However, if we were to leave it and hope that the problem goes away, we would find ourselves in big trouble. The world would be destroyed, once this unfortunately does happen there will be no turning back. If we were given this project to do again in the future, I would probably ask for more time to complete it in, so we would have been able to produce a more advanced project including a lot more detail and originality. I also think that working as a class, instead of in smaller groups would have made a difference because we would have been able to build on our experiences and create a really advanced project. Overall I thoroughly enjoyed the task we were set, mainly because it was different to what we normally have to do for coursework and I learned quite a lot of the background information on climate change. ...read more.