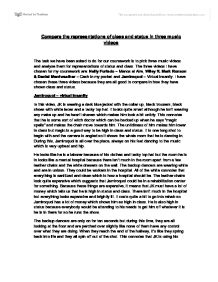 Compare the representation of class and status for 3 music videos

Compare the representations of class and status in three music videos The task we have been asked to do for our coursework is to pick three music videos and analyse them for representations of status and class. The three videos I have chosen for my coursework are: Nelly Furtado - Manos al Aire, Wiley ft. Mark Ronson & Daniel Merriweather - Cash in my pocket and Jamiroquoi - Virtual insanity. I have chosen these three videos because they are all good to compare in how they have shown class and status. Jamiroquoi - virtual insanity In this video, JK is wearing a dark blue jacket with the collar up, black trousers, black shoes with white laces and a tacky top hat. It looks quite smart although he isn't wearing any make up and he hasn't shaven which makes him look a bit untidy. This connotes that he is some sort of witch doctor which can be backed up when he says "magic spells" and makes the chair move towards him. The untidiness of him makes him lower in class but magic is a good way to be high in class and status. ...read more.

She has a load of stuff in the back of her jeep like boxing gloves which she throws out onto the road and doesn't give a second look to. She is singing about the man and she says "I surrender" and "I want to love you" This connotes that she is lower in status than the man otherwise she wouldn't be singing stuff like that to him. The video is set in a village but all of the houses look built up and expensive. We don't know that Nelly lives there but at the end of the video when she turns up at the man's house, it is in that built up area so it shows that he must have a lot of money. He is fully clothed and she is wearing shorts and a vest top which shows he is high in class and status because he can afford to live in such a nice area and can be in casual clothing. I think that the narrative of the video is that Nelly and her husband are having problems so they are seeing a counselor. ...read more.

The man had a glass of water with him and he was sitting at a desk. All of this connotes that he is involved in the meeting and the company has another branch in China which shows that the company has a lot of money and class and status. Towards the end of the video, everybody is parading through the halls because they are going home and they are very happy. The camera is looking up at them the whole time which shows they are all high in class and status. Conclusion These Three videos are all good to compare because the situations are similar in the way that everybody is portrayed to be either high or low in class and status through camera angles, lighting ect. But they all have different story lines. Nelly is trying to get her husband out of her mind, JK is in rehab and the people in the Wiley video are getting through a day in the office. They all compare well in how different status and classes can be used in different situations. Jamiroquoi is high in status while Nelly is high in status but lower than the other people in the video and although Wiley isn't actually in his video, his puppets do a pretty good job of showing that he is high in status. ...read more.