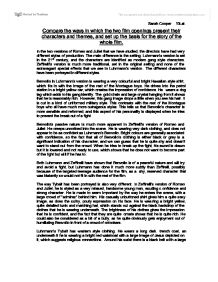 Compare the ways in which the two film openings present their characters and themes, and set up the basis for the story of the whole film.

Compare the ways in which the two film openings present their characters and themes, and set up the basis for the story of the whole film. In the two versions of Romeo and Juliet that we have studied, the directors have had very different styles of production. The main difference is the setting. Luhrmann's version is set in the 21st century, and the characters are identified as modern gang style characters. Zeffirelli's version is much more traditional, set in the original setting and none of the extravagant special effects that we see in Luhrmann's version. The different characters have been portrayed in different styles. Benvolio in Luhrmann's version is wearing a very colourful and bright Hawaiian style shirt, which fits in with the image of the rest of the Montague boys. He drives into the petrol station in a bright yellow car, which creates the impression of confidence. He wears a dog tag which adds to his gang identity. The gold chain and large crystal hanging from it shows that he is reasonably rich. However, this gang image drops a little when you see his hair. It is cut in a kind of uniformed military style. This contrasts with the rest of the Montague boys who all have much more outrageous styles. ...read more.

The Luhrmann version includes several different prologues. The first is the news report style magical floating television, The second is newspaper headlines, the third is commentary as a helicopter zooms around the city with lots of cuts and zooms in the camerawork, and the forth a rapid series of flashing sentences. I think that this is put in as the film is aimed at a teenage audience. The repetition of the prologue helps people remember it. Zeffirelli's prologue is much more relaxed, with a slow pan across a sleepy city at dawn and peaceful music in the background, and a well spoken man reading the prologue. In the Zeffirelli version, the extra characters are usually a part of the scene, and they are used to give an onlookers impression of the story. Their reactions are filmed for the fight scene. There is one shot where the civilians are standing above a wall and the fight is going on beneath it. The focus of this scene is the wall, which represents a division between the feud going on between the two families and the outside world. In Luhrmann's version the extras are more used for comedy, for example the section just before the fight when one of the Montague boys licks his nipple in front of some convent schoolgirls and two nuns, who then drive off unrealistically quickly in a minibus. ...read more.

The main difference in the film is the fact that Baz Luhrmann's version is set in the late 20th century, whereas Zeffirelli has decided to stick to the more traditional scenery. The Luhrmann version has kept more of the original dialogue but it is not as noticeable as the repeated prologues acclimatise the viewer to the Shakespearian tongue. One of the similarities is the target audience, as both of the films are aimed at a teenage audience. The way that the films appeal to their target audiences is very different. Luhrmann has used well know characters and repetition to make the film appealing to young people however Zeffirelli has cast completely unknown actors in the main roles, but they are of the same age as the target audience. Zeffirelli's version is also very simplified and misses out a lot more of the original lines and the filming is easy to comprehend. I think that Luhrmann has been more successful in appealing to a young audience, but maybe young people when Zeffirelli made his film were different to todays. I think that the opening of the more modern version appeals to me more, as I find it very interesting to see the clashing of setting and language working so effectively. The repetition of the prologue was also very good, as it made the opening much more memorable than Zeffirelli's version, something which is key for a good film. ?? ?? ?? ?? Sarah Cooper 10Lat. ...read more.