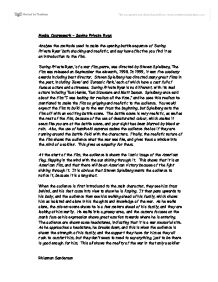 Media Coursework - Saving Private Ryan Analyse the methods used to make the opening battle sequence of 'Saving Private Ryan' both shocking and realistic, and say how effective you find it as an introduction to the film. 'Saving Private Ryan,' of a war film genre, was directed by Steven Spielberg. The film was released on September the eleventh, 1998. In 1999, it won five academy awards including best director. Steven Spielberg has directed many great films in the past, including 'Jaws' and 'Jurassic Park,' each of which have a cast full of famous actors and actresses. Saving Private Ryan is no different, with its lead actors including Tom Hanks, Tom Sizemore and Matt Damon. Spielberg once said about the film "I was looking for realism all the time," and he uses this realism he mentioned to make the film so gripping and realistic to the audience. You would expect the film to build up to the war from the beginning, but Spielberg sets the film off with an exciting battle scene. The battle scene is very realistic, as well as the rest of the film, because of the use of desaturated colour, which makes it seem like you are at the battle scene, and your sight has been blurred by blood or rain. ...read more.

The black colour of the iron hedgehogs indicates that danger is about to come and soon, the strange calmness of the sea and the iron hedgehogs evaporates and the cameras focus on boats, full of soldiers preparing for battle, packed like sardines in a can, charging to the shore of Omaha beach. On board one of the boats, the audience is placed into the middle of the action, by the use of hand held cameras and watches as one of the soldier's shaking, dirty hands opens a flask and has a drink. The shaky hand shows how terrified he is, how he is feeling, and that he must know he is going to his death. The first glimpse we get of this man is very quick, as he takes a drink from his flask and ducks his head back down. When we see him properly though, he has a calm look on his face as if he is putting a brave front on for the sake of the other soldiers he is in charge of. The other soldiers look at him as if they need reassurance, as he is in a position of authority. As people are sick around him, the audience sees how shockingly disgusting the war was and how scary it would be to be put in the middle off all of that. ...read more.

The way in which Spielberg shows you can't rely on anyone except yourself during the war has a shocking effect on the audience, because it shows them how isolated you would feel in the middle of thousands of people in the same position as you, which is strange. An object glance of everyone running up the beach, as their fellow soldiers are shot down makes the audience feel almost guilty that they can't do anything about it, and involves them in the film. In conclusion, Steven Spielberg creates a shocking and realistic view of the war in 'Saving Private Ryan.' He does this by using realistic props and makes the battle scenes intense and gory. He creates an in depth account of the war, focusing on a certain group of soldiers, unlike typical war films which do not normally concentrate on people, but more on fighting. Spielberg shocks the reality of the amount of deaths caused by the war into the audience, by showing them the real life memorial site, and also shows the audience how emotional people can become when subjected to the trauma of war. Also, I think Steven Spielberg does not glorify war in the film, but uses realistic battle scenes to show people what war really is, leaving them to make their decision on what they think of war. ?? ?? ?? ?? Rhiannon Sanderson ...read more.

As an analysis of a film and the consideration of the choices made by a director this is a very sound essay. It addresses all of the relevant aspects that come together to create a production and shows considered understanding of choices made by Spielberg.