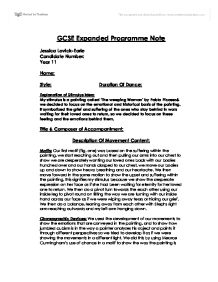 GCSE Expanded Programme Note Jessica Lovick-Earle Candidate Number: Year 11 Name: Style: Duration Of Dance: Explanation of Stimulus Idea: My stimulus is a painting called 'The weeping Woman' by Pablo Picasso& we decided to focus on the emotional and historical basis of the painting. It symbolized the grief and suffering of the ones who stay behind in wars waiting for their loved ones to return, so we decided to focus on these feeling and the emotions behind them. Title & Composer of Accompaniment: Description Of Movement Content: Motifs: Our first motif (fig. one) was based on the suffering within the painting, we start reaching out and then pulling our arms into our chest to show we are desperately wanting our loved ones back with our bodies hunched over and our hands clasped to our chest, we move our bodies up and down to show heavy breathing and our heartache. ...read more.

response to seeing newspaper photographs of the Luftwaffe's bombing of Guernica on behalf of Franco in the Spanish civil war on April 26, 1937 and the suffering that was caused. We then focused on the way cubist painting are painted and the way that they take an image and analyze it to the point where it becomes something more symbolic and thought provoking. We then decided to watch ghost dances because the dance by the woman in the red dress was very inspiring to our piece as she looked and danced as if she was too searching, reaching and waiting for a loved one. We then created a motif, which would focus on a specific aspect of the painting and the suffering behind it. My first motif (fig. one) communicated our main dance idea because we used movements which, signified the emotions that were felt not only by the woman in our stimulus but also by all the other women who lost husbands and loved ones during that civil war. ...read more.

If I were making my dance again, I would most likely change my second development to decrease the energy level before I finish to make it more subtle and fluid. I hope my dance successfully communicated what I set out to achieve, I wanted my dance to be individual like Vermeers painting. If I could change some of the moves I would not do as many turning steps and put some more still moments in to show the peaceful side of the painting. My second motif (fig. two) is the most successful as it shows the audience the desperation and longing by using my body, it is also successful because the moves are quite fluid like elements of the painting. I did this because the part of the painting I focused my second motif on was her expression, and I made the motif so that they were conveyed through the dance. I feel that my dance was successful in representing my stimulus, and the motif and gestures both worked well together to signify the shapes and my own interpretation of the painting. Fig. One Fig. Two Fig. Three ...read more.