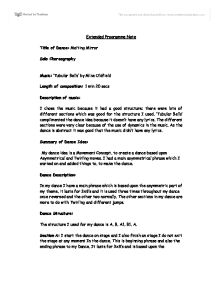 Extended Programme Note Title of Dance: Melting Mirror Solo Choreography Music: 'Tubular Bells' by Mike Oldfield Length of composition: 1 min 20 secs Description of music: I chose the music because it had a good structure; there were lots of different sections which was good for the structure I used. 'Tubular Bells' complimented the dance idea because it doesn't have any lyrics. The different sections were very clear because of the use of dynamics in the music. As the dance is abstract it was good that the music didn't have any lyrics. Summary of Dance Idea: My dance idea is a Movement Concept, to create a dance based upon Asymmetrical and Twirling moves. I had a main asymmetrical phrase which I worked on and added things to, to make the dance. Dance Description: In my dance I have a main phrase which is based upon the asymmetric part of my theme, it lasts for 3x8's and it is used three times throughout my dance once reversed and the other two normally. The other sections in my dance are more to do with Twirling and different jumps. ...read more.

Section B1: This section goes back to the second section but it is performed on different levels with different dynamics. The floor section is performed standing and the other part is performed either kneeling or on the floor. Appraisal: What the aim of the dance was trying to show was ways in which you can move in either asymmetric or Twirling movements, sections A and A1 put across the asymmetric sections and sections B and B1 put across the Twirling movements. I started on creating movement material by thinking of 5 Asymmetric moves and 5 moves which travelled and Twirled, I then developed them into separate phrases adding in moves and changing levels and dynamics. As the choreographer I wanted to have at least 1 movement that was repeated throughout the dance. I used lots of changes in dynamics in the first phrase because I thought it was an important element to use it is also very effective, the reason I used it in the A section is because it is more of a varied phrase, whereas with the B phrase it is more continuous and flowing, and looks better with similar dynamics. ...read more.

If I were to make the dance again I would change the dynamics of the dance and make sure that it was completely finished. I would have made it longer and added more moves, repetition, and levels. I also think that if I were to do a solo composition again I would choose an actual theme to make it easier to think of moves. In conclusion I wasn't as pleased with my dance as I could have been because of the fact that it was shorter than I thought and there were pauses in certain places where there shouldn't have been. I could put more feeling into the dance which I think would make it more effective. If the dance had been longer I think I could have portrayed the dance idea better. One regret that I had was not having enough time to rehearse in an open space, I was restricted to the space I had in my bedroom, I also should have put more thought into some of the moves and spent more time overall to make it better. But overall I am quite pleased the finish product. ...read more.