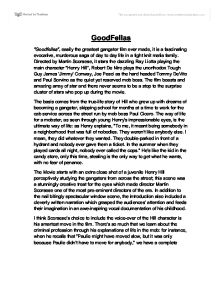 GoodFellas "Goodfellas", easily the greatest gangster film ever made, it is a fascinating evocative, murderous saga of day to day life in a tight knit mafia family. Directed by Martin Scorsese, it stars the dazzling Ray Liotta playing the main character "Henry Hill", Robert De Niro plays the unorthodox Tough Guy James 'Jimmy' Conway, Joe Pesci as the hard headed Tommy DeVito and Paul Sorvino as the quiet yet reserved mob boss. The film boasts and amazing array of star and there never seems to be a stop to the surprise cluster of stars who pop up during the movie. The basis comes from the true-life story of Hill who grew up with dreams of becoming a gangster, skipping school for months at a time to work for the cab service across the street run by mob boss Paul Cicero. The way of life for a mobster, as seen through young Henry's impressionable eyes, is the ultimate way of life: as Henry explains, "To me, it meant being somebody in a neighborhood that was full of nobodies. They weren't like anybody else. I mean, they did whatever they wanted. They double-parked in front of a hydrant and nobody ever gave them a ticket. ...read more.

The directors' choice of camera angles really emphasized the circumstances Henry was in; the camera was deliberately placed above Henry and under Henry's father to show Henry's vulnerability at that moment in time and it also shows the anger in his father's face and the viciousness that empowered it. Henry then goes to say "everybody takes a beating sometimes" this scene was simply remarkable. This scene also momentarily marks the end of Henry's family in his life. The directors' use of camera angles really varies from scene to scene for instance in the scene were Henry Hill was parking the Cadillac's, the camera was purposely placed underneath the actor to place emphasis on how astonishingly abnormal it looked for a child to be driving a car, And it also showed how delighted Henry was to finally be a part of an anomality which he once aspirated to become. Another compelling use of camera angles was when a young Henry Hill was sprinting away from a fortune of exploding cars. The director's use of an extra long shot camera angle goes to show the audience just how many cars are being destroyed just for the sake of the movie, additionally it subsequently shows the audience just how far and how notorious Henry had become. ...read more.

Although the soundtrack has nothing to do with the happenings in the film, it does generate a change of atmosphere from the cosy light hearted comfort of childhood to the hardship and vicious malice of adulthood. An astonishingly violent, yet wonderfully alluring, epic, it seems almost beyond belief that GoodFellas is based on real life; the script is meandering, complex and enthralling. With its mark of authenticity, the dialogue seems absolutely spot on - accurate and believable in its every idiom. When voiced by Scorses' vast array of characters the words spring to life, filling every phrase with energy and illuminating the speaker with a glint of recognition. However, De Niro and Pesci move far beyond this point; the pair inhabit their characters so thoroughly, taking on every mannerism and tic, that they become deeply unnerving. Pesci is stunning as a volatile, on-edge killer while De Niro is no less menacing as a quieter, paranoid killer. While the story twists and turns, exploring minute details of the mobsters existence, absolute control is kept over every technical issue. The camera-work is exceptional, smoothly gliding one moment then snapping into a freeze-frame the next. Together with the perfect soundtrack, which mirrors the mood of key scenes closely, these issues enhance GoodFellas atmosphere to an all-enveloping degree. A superb experience, where every moment counts, from a dedicated film-maker. ...read more.