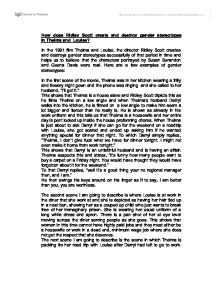 How does Ridley Scott create and destroy gender stereotypes in Thelma and Louise?

How does Ridley Scott create and destroy gender stereotypes in Thelma and Louise? In the 1991 film Thelma and Louise, the director Ridley Scott creates and destroys gender stereotypes successfully of that period in time and helps us to believe that the characters portrayed by Susan Surandon and Geena Davis were real. Here are a few examples of gender stereotypes: In the first scene of the movie, Thelma was in her kitchen wearing a frilly and flowery night gown and the phone was ringing and she called to her husband, "I'll get it." This shows that Thelma is a house slave and Ridley Scott dipicts this as he films Thelma on a low angle and when Thelma's husband Darryl walks into the kitchen, he is filmed on a low angle to make him seem a lot bigger and fiercer than he really is. He is shown as already in his work uniform and this tells us that Thelma is a housewife and her entire day is pent locked up inside the house preforming chores. When Thelma is just about to ask Darryl if she can go for the weekend on a roadtrip with Louise, she got scared and ended up asking him if he wanted anything special for dinner that night. To which Darryl simply replies, "Thelma, I don't give fuck what we have for dinner tonight. I might not even make it home from work tonight." This shows that Darryl is an unfaithful husband and is having an affair. ...read more.

This is where the well dressed, well mannered, charming Harlan walks over to them. He is filmed on a very low angle. "Well hello ladies," he says, "isn't this place a bit rough for bauties like you?" Thelma is flattered by the attention that Harlan gives her, but Louise doesn't buy it. She realises what Harlan is quickly as it shows a man just like him flattered her back in Texas. "Oh I'm sorry," Louise states, "we're having private convorsation here." "Oh right okay ladies," Harlan says, visabaly dissapointed. Thelma holds him back, "no it's okay. He can stay." The waitress returns and gives Thelma her drinks, "you're not bothering these poor girls are you Harlan?" "Nah," Harlan replies, "I'm just being friendly." "Your name's Harlan?" Thelma asks, "I had an uncle named Harlan." Thelma then goes to dance with Harlan and he spins her aorund many times making her very dizzy and in need of fresh air. He is clearly taking advantage of her. Thelma states she need fresh air and Harlan takes her outside. Harlan then starts to take advantage of Thelma and then he says that he wont hurt her. This shows us that Harlan has no regard for Thelma's thoughts or feelings. Louise then bursts out of the bar holding the revolver that Thelma had put in her bag earlier and aims it at Harlan. Harlan just laughs and tells Louise to "suck his dick." Louise then shoots Harlan in cold blood. ...read more.

On which note, Thelma slams the lid shut upon the officer. The last scene I am describing is the scene at the end of the movie where Thelma and Louise have been evading the police successfully for a fair few minutes which breaks the stereotype that women are bad drivers, but they eventually get captured on the edge of the Grand Canyon. Behind Louise's convertible is about twenty police cars, a helicopter and at least forty heavily armed officers. The helicopter lands and a few suited FBI Agents get out, one of which is the one man in the forces who believes Thelma and Louise's story. Thelma turns to Louise and tells her she can't go back to the way she used to be as she had loved the experience. Louise nods and turns on the engines despite the officer's warnings of opening fire if they did not give themselves up to be arrested. Louise slams the car forward toward the edge of the Grand Canyon. The only FBI Agent that believes them sprints after them so that the police will not fire. He shouts trying to stop them, but Thelma and Louise are adamant. Their car flies off of the edge of the Grand Canyon and the screen flashes with images of the past two days adventure. In conclusion I believe that Ridley Scott provides the audience with a thrilling and extremely realistic insight into the sexism and gender stereotyping that was around in America at the time of the film's release. I believe that this film teaches a lesson to all American men who were racist at the point of the film's release. ...read more.