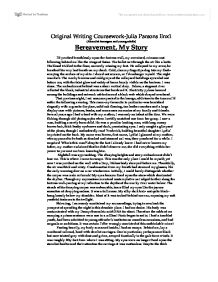 Original Writing Coursework-Julia Parsons Enx1 (Aimed at teenagers and young adults) Bereavement, My Story I'd perched breathlessly upon the fortress wall, my oversized, crimson coat billowing behind me like the wings of Satan. The bullet cut through the air like a knife. His blood trickled to the floor, narrowly missing my feet. He collapsed in my arms; he breathed his very last breath on my cheek. Cold, clammy fingertips dug into my flesh-scraping the surface of my skin. I dared not scream, or I'd endanger myself. The night was dark. The murky browns and cold greys of the collapsed buildings sprawled out before me; with the faint glow and safety of home barely visible on the horizon. I was alone. The embankment behind was a sheer vertical drop. Below, a stagnant river reflected the bleak, industrial structures that bordered it. Electricity pylons loomed among the buildings and network cables formed a black web which draped overhead. That previous night, I sat unaccompanied in the lounge, oblivious to the trauma I'd suffer the following evening. This room-my favourite in particular-was furnished elegantly with: a granite fireplace, solid oak flooring, tan leather couches and a large display case with pictures, books, and numerous memories of my family and friends. ...read more.

Shivering, I nervously scrutinized my surroundings, trying to overlook the prospect of spending the night in this desolate place. I had no choice. His body was contaminated with my Deoxyribonucleic acid-DNA for short. Therefore the odds of me escaping a prison sentence were one in a million! Panic began to set in. I had a troubled youth, had been admitted to young offender's institutes on countless occasions, and had no goals or ambitions. It was certain I'd be wrongly convicted of this unthinkable crime! Panting heavily, my body screamed inside, I had no escape. Behind me, lay a moribund railroad, lined with derelict carriages. One in particular, perhaps once black but now tainted grey with dust and grime, swayed frantically in the gale force winds. It was roughly fifty feet from where I was sitting. My eyes were no longer fixed upon the stars but had turned their attention the carriage-it was motionless. Despite the thick misty darkness, I observed the outline of an open door, which hung on by one rusted hinge. It did not have a handle (it had broken off many years ago) and all but one of the carriage windows were intact. ...read more.

At least playing all those games of musical statues alone in my room was worthwhile! However, I'd made the fatal mistake of overlooking the security light which pointed directly at the embankment. Holding my breath deeply-I almost passed out in the process. My mind began to wander back and forth between memories of my lifetime. A tear rolled down my cheek-followed by another-until my tear ducts became flood plains. It's true what they say y'know!? Your life DOES flash before your eyes! The figure grew closer and closer to where I was sat; my worst fears were confirmed. It was him. With a sudden beam of light, the entire area lit up and for the first time, I witnessed the horrors that had been hidden from my vision. I wasn't alone. Slumped before me was a man, with long mousy brown hair, thick bushy eyebrows and dark, penetrating eyes. He wore a tag, his name was Brown, first name Frederick. I felt my brain swell inside my skull, as my jaw dropped to the floor. Behind him, stood the figure of a woman, with gorgeous bouncy brunette locks and bright blue eyes that shone like the ocean. She was drenched in blood. Written by Julia Parsons English Group:10x1 Tutor Group: B6 ...read more.