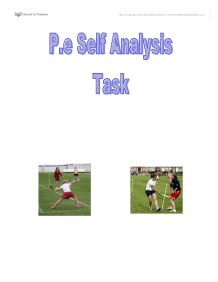 My self analysis will include the participation in Rounders, Batter position. Section 1. As a batter in rounders, you will need an all round fitness, have good speed, good reaction time, co-ordination - hand eye co-ordination, agility, balance, muscular endurance, cardiovascular endurance, good timing and a good body composition. These all contribute to the performance in game by enhancing the batter's fitness and components in order to perform up to standard continuously throughout the game. All Round Fitness. Generally, any athlete or person who enjoys playing a game, such as rounders, will be healthily fit. However, in order to achieve this general fitness, a healthy diet and workout routine should be in place; this will contribute to all the fitness components such as agility, stamina, strength, balance, co-ordination and speed. However, because this fitness is only generic, extra exercises would be needed to progress the other components according to the sport that a person is participating in. Good Speed. Speed is a natural ability, however, to increase your speed you would need to increase your stamina, strength and include exercises that will test your speed and exercises that you could adapt to increase your strengths and improve your weaknesses. You should have good speed whilst being a batter in rounders to be able to hit the ball and then as soon as you've hit it and it hasn't been caught, sprint to the first post or around all four posts to score points. Reaction Time and Good Timing. In order to hit the ball how you want to, hit it well, you need to know when to swing the bat and how to adjust it so that you can get the intended hit. As a batter, you are trying to hit the ball into an empty space in the field and sprint around all the posts, or stop at a post when necessary. ...read more.

Leonie Martin's Weaknesses: Leonie Martin's weaknesses take center stage when it comes to the skill component of catching. This is the part of the rounders game that she needs to work on and improve the most - if she were to be put on a base, that's when she would need to catch properly and it would count the most. How this affects Leonie Martin's Performance: This would affect Leonie Martin's game due to her positioning. She wouldn't be able to aid the team as best as she could if she were put on a base. Leonie's position is on first base and for her to successfully fulfill the demands of being on first base she would have to catch and throw quickly and efficiently to either receive the ball and stump the post off to execute the ball or throw off to another post or the bowler. Section 4 Suggest what Training Practices might be used to Maintain the Strengths but in particular, to Address the Weaknesses that you have Identified. Drill 1. Drill 1. This drill consists of two teams; each team is told to set up a rounders pitch or a rounders game as fast as they can. This will allow each team and all the players participating to get familiar with the set up of a rounders pitch and will also learn to set one up quickly and conveniently. Drill 2. Drill 2. In this drill an assortment of catches and throws will allow each player to exercise and enhance their throwing and catching skills and also learn the position they would be on the pitch if they were playing as the backstop, on first base or as the bowler. This drill will also teach the players to judge how much strength to put behind the ball, where the person who has the ball should throw to judging on the positions of all the other players and learn to aim accurately. ...read more.

The player or performer will have gained an overall fitness and generally improved their performance in a game situation. As the weeks had progressed, the players will have experienced the gradual increase of reps of the training they carried out. They will have achieved OVERLOAD by increasing the level of each activity, making them work harder and push themselves. The players will have had an increase of skill in each component, there will be more consistency in hitting the balls when batting, catching the balls more efficiently when fielding, throwing the balls quicker and more efficiently whilst fielding and bowling more good bowls rather then foul bowls that would cost them points. The effort they put into the game will have experienced an increase as well because now they are more fit and have more knowledge of the game, they will enjoy the game more and give their all rather then just hoping for the best when they began a game. Their tactical awareness will have had an increase as well, making them more aware of everything going on around them in the pitch and the players fielding or batting on each team; aware of spaces where they could aim to hit the ball in order to gain more points for their team. Their understanding of the game will have amplified which will have added more effectiveness to how they play the game at hand. The fitness components; Balance, Co-Ordination (Hand Eye Co-Ordination), Agility and good speed will have all seen an increase because the six week training programme will have enhanced their abilities through the exercises that were included. Their knowledge of the Rules and Regulations will have seen an amplification because the drills included in section 4 will have taught them and also they will have encouraged them to learn the pitch and how the rules apply to the game. The shapes of their bodies, their weights and their sizes will all have changed; they will have become more honed - more muscular to support the fitness components needed to be able to play the game. ...read more.