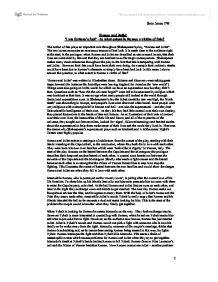 Romeo &amp; Juliet 'I am fortune's fool' - to what extent is Romeo a victim of fate?

Romeo and Juliet 'I am fortune's fool' - to what extent is Romeo a victim of fate? The notion of fate plays an important role throughout Shakespeare's play, "Romeo and Juliet". The two lovers encounter an enormous amount of bad luck. It is made clear to the audience right at the start, in the prologue, when Romeo and Juliet are described as star-crossed lovers, that their lives are controlled by fate and that they are destined to suffer tragic consequences. Shakespeare makes many more references throughout the play to the fact that fate is tampering with Romeo and Juliet. However their fate could have been their own doing, for example their untimely deaths could have been due to Romeo's character or simply have been bad luck. In this essay I aim to answer the question, to what extent is Romeo a victim of fate? 'Romeo and Juliet' was written in Elizabethan times. Science and discovery were taking great leaps forward (for instance the first ships were leaving England for America the 'new world'). Things were also going on in the world for which we have an explanation now but they didn't then. Questions such as "how did the universe begin?" were left to be answered by religion which was dominant at that time. It was an age when many people still looked at the world through fearful and superstitious eyes. In Shakespeare's day the infant mortality rate was high, the 'black death' was abounding in Europe, and people's lives were short and often brutal. Most people were very religious with a strong belief in heaven and hell - and also the supernatural - and they had little scientific intelligence of their own. As they felt they had little control over their own destiny, they placed themselves in the hands of fate and fortune. As an illustration of their lack of control over their own lives, the insecurities of their life and future, and all of the mysteries of the universe, they sought out ...read more.

These dramatic devices strengthen the feeling of dramatic irony because the audience knows what is going to happen from the prologue. These ominous remarks make the ending feel inevitable. They also lend the play a more interesting supernatural dimension. On several occasions Romeo and Juliet have premonitions. Before the Capulet party Romeo had a vision of 'some vile forfeit of untimely death'. Juliet had a vision that she sees Romeo dead 'in the bottom of a tomb'. At the start of the last act of the play Romeo said that he dreamed 'my lady came and found me dead'. These quotations prove that fate and fortune are in the play and that they are affecting them. Those quotations were also used by Shakespeare to remind the audience that they are fated or 'star crossed' and they are being controlled by fate. Romeo and Juliet also have the sense that fate and fortune are controlling them, for example when Romeo left for Mantua Juliet asks 'fortune' to 'be fickle' and she hopes that fate will not 'keep him long, but send him back'. This implies that Juliet believes fate and fortune has sent him away and they are controlling them, she also tells the audience that Romeo is a strong believer in fate when she said 'what dost you with him, that is renowned for faith?' This makes the audience recognise the strong belief both Romeo and Juliet have in fate and fortune. Earlier in the play, when Romeo killed Tybalt in a rush of anger he exclaimed, 'I am fortune's fool'; another piece of evidence of the strong belief Romeo and Juliet have of the control fate has over them. Shakespeare made many more references throughout the play to fate tampering with Romeo and Juliet. Also he used cosmic and religious imagery to emphasise the belief that fate and fortune have a hand in both Romeo and Juliet's young deaths. ...read more.

Franco Zefferrelli's adaptation keeps closely to the play in his direction. He highlights Romeo's defining characteristics - the negative and positive characteristics - in the scene when Romeo learns of his banishment. He keeps it very near to Romeo's passionate side in the film, when he was highlighting Romeo's reaction at learning that he is banished from Verona. Zefferrelli interpreted Romeo's upset behaviour very closely, when Romeo is crying and sobbing in the Friar's cell he is very agitated. This follows Romeo's emotion in the play but his behaviour in the film highlights it to a very large extent. Both film versions highlight fate and destiny and also they highlight Romeo's character they might intensify the concepts of either it was fate and destiny's fault or they could intensify that Romeo's demise was because of his own character however they both show reasons for Romeo's downfall; the modern version relies on fate and destiny and Shakespeare's devices to make their film interesting and also to put over their view that their tragic ending is because of fate. In the late nineteen-sixties version of the play they also put across their opinion about Romeo's downfall but it relies more heavily on Romeo's character than the concept of fate and fortune. So you could see there are different ideas about the main clause of Romeo's downfall. In conclusion there are a number of reasons - all connected to each other - for the tragic ending of Romeo and Juliet. Firstly Romeo is a flawed character; he is highly passionate. This connects with Romeo's hastiness and impulsiveness which both lead to his downfall, for example his rush to die at the Capulet tomb because all seemed lost. However Shakespeare makes many references to fate and fortune and also put in dramatic devices such as the prologue to show the influence of fate and destiny to his audience and as everything for the lovers goes wrong it could be said that Romeo is a victim of fate. ...read more.