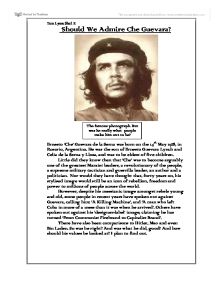 Should We Admire Che Guevara

Soon after this he took up arms with the rest of the insurgents and displayed great leadership ability, so much that he was named commander of a second guerrilla column composed of local peasant recruits. He was by now, a trusted adviser to leader of the force, Fidel Castro and he was also responsible for organising military training camps, a radio station, a munitions plant, and a small network of schools in the territory controlled by the guerrillas. But in 1958 Che's soldiers met a much larger, better equipped Cuban militia at the battle of Santa Clara. After an intense skirmish Che's guerrillas won a decisive victory the knock on effect of which forced the dictator Batista to flee the country, in 1959 Che's forces took the fortress of La Caba�a in Havana the capital of Cuba and this signalled total military victory and the completion of the revolution. This gave the guerrillas a heroic place in history. Guevara played held several powerful positions in the new Cuban government under Castro: serving first as military commander of La Caba�a fortress and successively as a top official of the National Institute of Agrarian Reform, he was then made president of the National Bank of Cuba, and Minister of Industries. In the last two posts, Guevara (who was awarded full citizenship rights by the Castro government) was largely involved in the immensely complex and difficult task of turning around a sugar-based, capitalist economy heavily dependent on the United States and setting it on the right track after years of corruption. In 1960 Guevara helped negotiate a trading pact with the Soviet Union, exchanging sugar for capital goods; due to the fact that the United States had imposed an economic boycott of the island in that year, he also travelled to other Eastern European countries to develop new commercial relations. Che was much more knowledgeable in Marxist economic theory than Castro, and he dreamed of a socialist outcome for the Cuban Revolution and encouraged the Cuban leader to take the definitive step toward a state-run system by nationalizing virtually all of the country's industry in late 1960. ...read more.

He was, like Trotsky in his dispute with Stalin, skeptical that the kind of socialism that truly served the poor could survive solely in Cuba; So, he died attempting to internationalize the struggle and thereby spread the revolution. His romantisized and corporate pimped image (which he would have hated) has been a thorn in the side of the left wing politics he supported. Inspiring, natural and iconic military leader and tactician. Left Cuba in a totalitarian dictatorship which has lasted to this day. Powerful politician, brightened the futures of many Cubans, and helped the country out of an economic crisis. In his lectures he encouraged his men to have an modern islamic extremeist-esque hate for the enemy. Fought heroically for the rights of the poor across the world. His greatest military victory, at Santa Clara, may not have may have been partly down to bribery. In My Opinion Although it has been a difficult decision I believe that a subject of such controversy and high emotion cannot be suitably concluded in three thousand words. Although I condemn Che's the ruthlessness and double crossing attitude, and the atrocities that were committed through him and Fidel Castro. I believe that Che had the welfare, and the love of his people at heart, and it is sad that his brilliant legacy has been tarnished a little in this way. I also believe that many of the greatest, most inspiring leaders the world has ever seen l have had their dark side, and have made that sacrifice for the sake of spreading what they believe to be the truth. I am certain that anyone that wears the T-shirt should be aware of the history behind it. I honestly think however, that it is essential for the human race to push the boundaries, to keep pursuing them through thick and thin, for the sake of improving the world for everyone. And that's just what Che did. "Ever onward to victory! Our country or death! I embrace you with all my revolutionary fervour. ...read more.