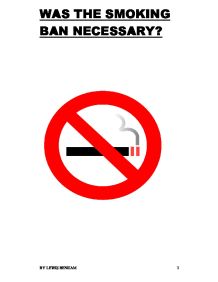 WAS THE SMOKING BAN NECESSARY? 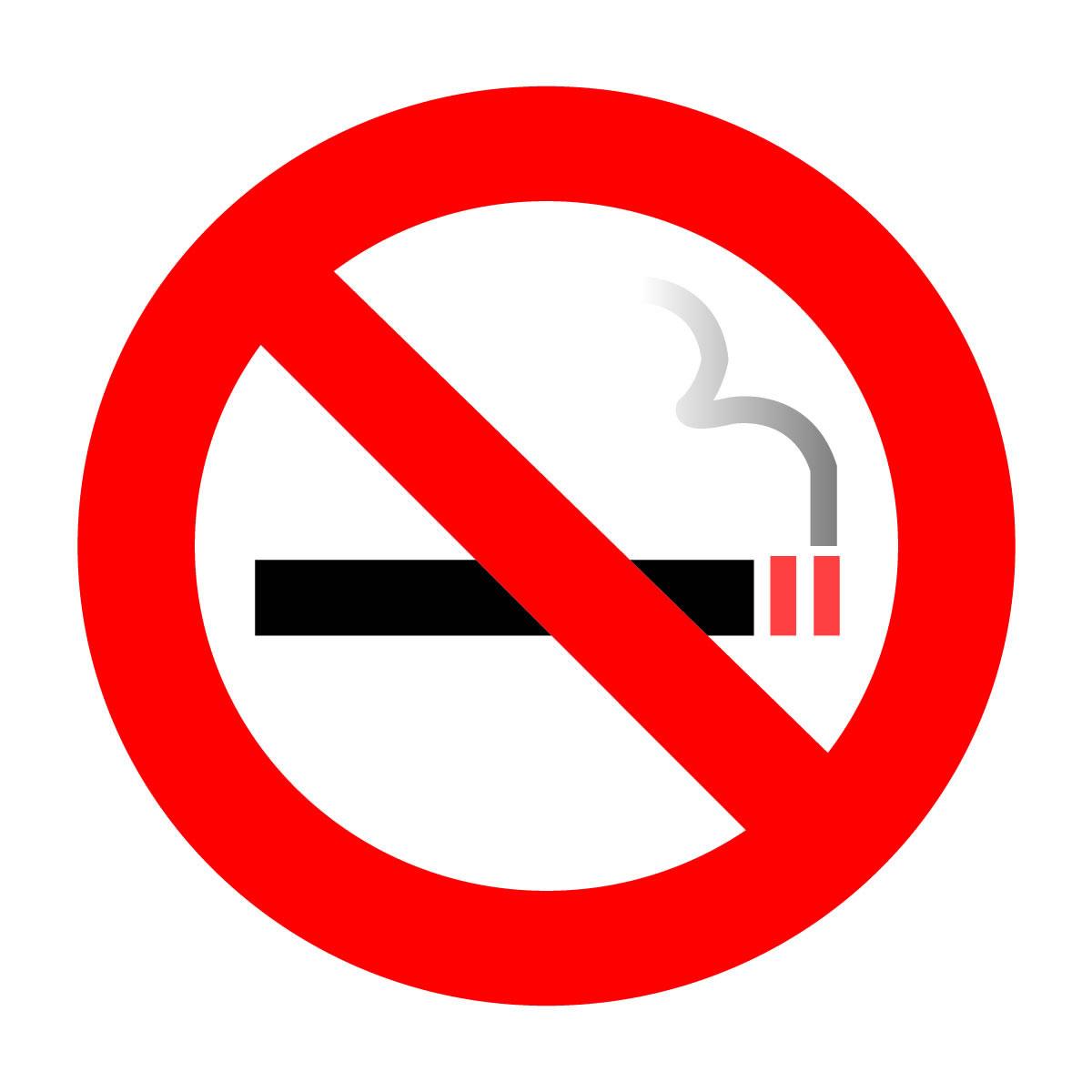 Has England made the right decision by banning smoking in public areas? The smoking ban is a law designed to decrease the amount of smoking in public. The 01/07/07 was when the ban was first enforced. Many people argue their opinions on the new law; in my case study we will find out whether the benefits out weight the risk’s or not and whether the evidence given for both for and against are based on scientific facts or opinions. 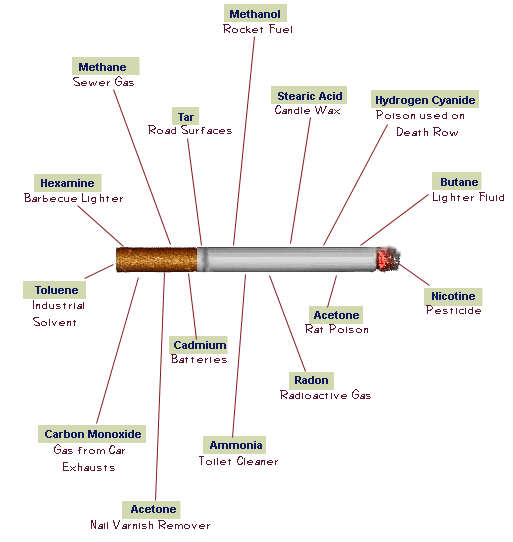 I found the information about the effects of smoking on a website (see back). I believe the websites information is reliable as it is a national website and all the information has been peer reviewed by teachers and scientists and all is based on scientific facts.

Correlation between smoking and cancer 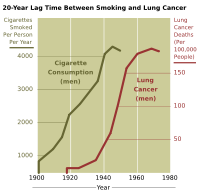 This graph shows a clear correlation between smoking and lung cancer. This information is reliable as the information has been researched over a long period of time and over a large scale of men. The website I got this information from:en.wikipedia.org/wiki/Smoking 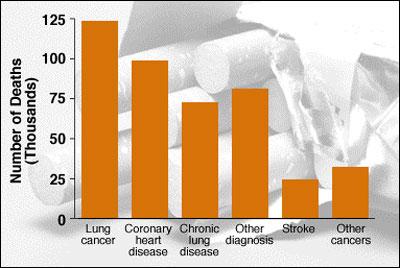 These are the effects of smoking, as you can see lung cancer is the highest cause in number of deaths however other diseases have a high number of death rates. This information is reliable as it has been researched for a long time and a large number of people have been involved in the research. This information was stated by:teens.drugabuse.gov/drnida/drnida_nic2.asp

There are around 4000 different chemicals in a single cigarette; nicotine, tar and carbon monoxide are known as the worst and the effects can and may be dangerous.

“Nicotine, an addictive substance, only 60mg (milligrams) would be enough to kill in a matter of minuets” smaller doses may effect the heart, CNS, circulation, digestion and the immune system.

The tar in a cigarette is brown and contains carcinogens. Carcinogens are any substance that has the ability to cancer. Tar can and may affect the mouth, throat and lungs.

Carbon monoxide affects the oxygen in the blood. “It combines with haemoglobin more easily tan oxygen reducing the bodies capacity to carry oxygen.

The quotations above about the chemicals in a cigarette are from a website that has been peer reviewed and the information is based on scientific facts.

Passive smoking is inhaling other people’s smoke from cigarettes. Second hand smoke is almost invisible and odourless. However wherever people smoke there are chemical fumes intoxicating the air the effects of passive smoking for adults usually can be: 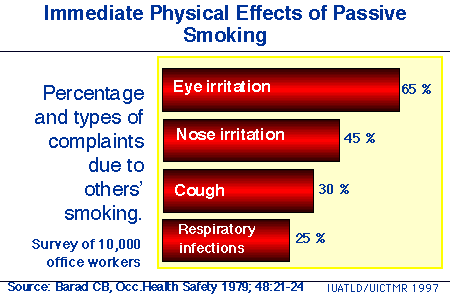 This survey shows how office workers find the side effects of smoking immediately; eye irritation is the most popular symptom. This information is valid and reliable as the information was done over a large scale of people. The source I got the information from was:

Was the ban the right decision (arguments)

These are some of the reasons why people are for the smoking ban.

According to the world health organisation, one out of every two smokers will be killed by tobacco.

From 1985-2000, tobacco has killed more than 60 million people in the developed countries alone.

Children are very vulnerable as their bodies are still developing. Around half of all British children are growing up in homes where at least one parent is a smoker. Stated by: http://www.bbc.co.uk/insideout/westmidlands/series4/smoking_health.shtml

This information I believe is reliable as the website is a national website and all the information given has been peer-reviewed and the information is good scientific evidence as the research was carried over 15 years and involved 60 million people.

On this graph below you can see that smoking is the most popular cause of death: 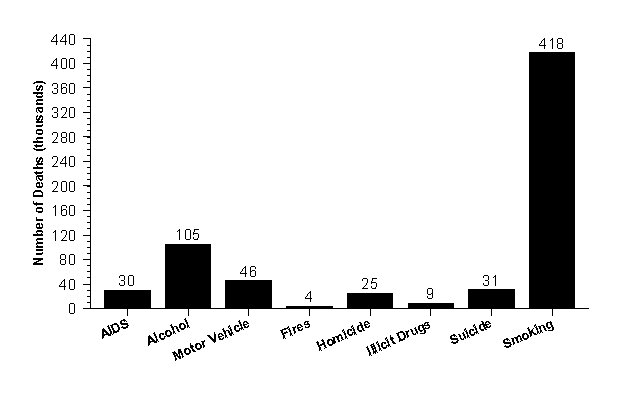 This graph came from this website: www.biosyntrx.com/Article.php?ArticleID=274 the information seems in contents and reliable because it involves a large sample of people who have died however the information has not been peer-reviewed.

Smoking is a greater cause of death and disability than any other single disease says WHO (World Health Organisation).

Not being able to smoke in public places may make people smoke at home risking the health of others around them, claims John Raid, the former British Cabinet Member, however House Of Commons Health committee and the Royal College of Physicians prove him wrong by saying that there is no evidence to support Raid’s claim as a study has proven that there is an increase in smoke-free households in Ireland ‘ from 22% to 37% between 1996 and 2003’. This information comes from Wickepedia and is a reliable source as it looks at both sides of the argument and the study that took place has been taken place over a long period of time on a variety of households.

People may argue that it is taking away the human rights from smokers. A group of smokers I have known stated that ‘more children would be affected by passive smoking as parents will be smoking at home.this is valid opnion however it is not a scientific fact. Smokers also argue that it cigarretes calm them down, and alows them to relax.

It is a fact that businesses have been losing money. E.g, bingo clubs nhave lost 8% already since the ban has been introduced as people have a habbit of smoking whilst playing bingo at the same time.

Smoking is a problem, however drinking is too. Smokers wonder why the government has put a ban on smoking but not alcohol.

I personally believe that endangering someone else’s life is selfish and completely unacceptable. Those who wish to harm their own bodies shall do it in the own space where nobody else can be affected. If people can stick to these rules I believe that the ban will be success and less people will die of smoking related diseases. However I understand that smokers want freedom of choice; my suggestion would be to create a smoking zone in public areas where smokers can be separated from non-smokers while smoking. Overall the benefits out weigh the risks and I believe it is a good idea to precede with the smoking ban.