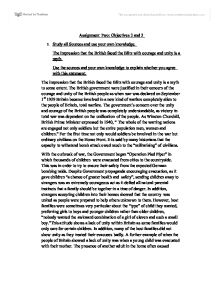 In London especially in the East End the was a feeling of resentment towards the more wealthy as it was felt it was unfair that they had better conditions. For example despite food being rationed the richer people of Britain were able to eat in restaurants or to buy more expensive foods on the black market. Source D shows this lack of unity and obvious class divide. It shows an angry scene of confrontation and the desperation of the people and the loss of any sense of morality and appropriate conduct. However, other sources strongly contradict this source showing great courage and unity among different genders and classes. This sense of unity is shown is source B in which you can clearly see people of different social standings such as a policeman, ARP warden and nurses working together in order to deal with the tragic situation, putting the bodies of school girls into sacking. This photo epitomises the unity of the British people as it shows a great diversity of people cooperating in a situation of extreme adversity. It is the belief of some historians that the Blitz unified the previously divided classes through the comprehension that a bomb would not distinguish between the classes. However it is shown in some sources that the people of Britain did not face the bombing raids with courage and unity as it caused a new phenomenon called trekking. ...read more.

This positive attitude shows that the British people faced the Blitz with courage and unity as they used the company of others to keep their spirits up, courageously and defiantly laughing in the face of danger. Furthermore, many Londoners bought platform tickets for the London underground and then camped at the stations at night. Though there were incidents of hostilities such as arguments and fights but that is only to be expected when the psychological strain of incessant bombing is considered. Therefore, positive and powerful memories such as the one stated earlier cannot be discounted, there is too much evidence showing that the camaraderie of the people was strong. Therefore, to conclude I believe that the people of Britain did face the Blitz with courage and unity and that this impression is not a myth. There is no doubt that people did find the incessant bombing raids psychologically draining and therefore states of panic did occur with consequent "treks" into the countryside. However, the evidence that the people of Britain faced the Blitz with courage and unity is too overwhelming to be completely dismissed.The fact that thousands of men and woman joined voluntary services to support the war effort and the defiance and resilience of the people of Coventry cannot be ignored. After all Britain was victorious in a state of total warfare and to do so a country must be unified and fight courageously. Francesca Osborne 11CD Francesca Osborne 11CD Francesca Osborne 11CD Francesca Osborne 11CD ...read more.