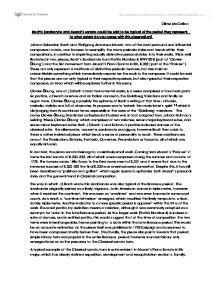 A Comparison of Bach's Sarabande (Partita Number 4) and a Mozart Piano Sonata (K.333)

Bach's Sarabande and Mozart's sonata could be said to be typical of the period they represent. To what extent do you agree with this observation? Johann Sebastian Bach and Wolfgang Amadeus Mozart, two of the most profound and influential composers to date, can be seen to exemplify the many periodic styles and trends within their compositions, in addition to imprinting equally distinctive personal styles into their works. This is well illustrated in two pieces, Bach's Sarabande from Partita Number 4, BWV 828 (part of 'Clavier-�bung') and the first movement from Mozart's Piano Sonata in Bb, K.333 (part of the 'Paris set'). These not only represent a multitude of distinctive periodic features, but also hold an unidentifiable something which immediately associates the work to the composer. It could be said that the pieces are not only typical of their respective periods, but also typical of their respective composers, an idea which will be explored further in this essay. Clavier-�bung, one of J.S.Bach's most monumental works, is a series comprised of four main parts: six partitas, a French overture and an Italian concerto, the Goldberg Variations and finally an organ mass. Clavier-�bung is possibly the epitome of Bach's writing at that time; virtuosic, melodic, stylistic and full of character. ...read more.

and fuse it with something then seen as more experimental (homophony). Thematically, there is a quite obvious 'theme' (albeit very short) which consists of two demisemiquavers and a dotted quaver, all descending a tone at a time. This is then manipulated quite extensively by inversion, intervallic augmentation, repetition and sequential repetition. This was known as 'fortspinnung', translated from German as 'the spinning out of an idea', again very common of the period the piece originated in, although less so in the Classical period. A more common practice of the Classical period was the use of clearly defined themes, which were then manipulated generally by modulation, although sometimes by intervallic modification. However, despite these changes, these were always recognisable as the theme. Another aspect typical of the Classical period, as seen in this piano sonata, are certain bass figurations such as the arpeggically figured block chords, and even the almost clich� Alberti bass. Another rather stylistic feature of J.S.Bach which can be seen in this Sarabande is his frequent use of suspensions. These are seen on the second beat of the piece (a 7-6 suspension) as well as at the end of the A section. These are seen in abundance throughout many of his other works. ...read more.

Also, considering that Bach strove for a continuous uninterrupted melody line, and that rubato is a predominantly romantic concept, the pauses and rubato in this seem out of place. Although not as profound a problem as in the Baroque period, the problem of not notating everything still persisted in the Classical period, although not so much concerning ornamentation. Often things omitted from the written score tended to be things such as dynamics and pedalling amongst other things. However in my opinion, in these cases it is much easier to accurately guess what the composer intended, by listening and following the melodic shape and phrasing. In conclusion, through the analysis of the multitude of features within each piece, it is easy to identify the periods they come from, thus making them excellent examples of the periodic styles of composition. Especially in the case of J.S.Bach's sarabande, the achievement of managing to create a typically Baroque piece whilst incorporating a personal style and forward thinking compositional trends is a feat unto itself. With regard to the Mozart Piano Sonata, to have created a set of works which are famously known almost 300 years later is proof of their success. The two pieces, both intricate and well written, frequently re-recorded and re-interpreted, stand to show the insurmountably high standards which both composers set in their works and justify why both composers enjoy such popularity so long after their time. ...read more.