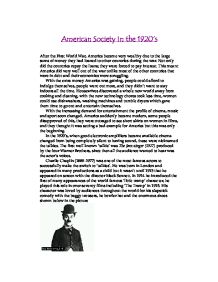 American Society In the 1920's After the First World War, America became very wealthy due to the large sums of money they had loaned to other countries during the war. Not only did the countries repay the loans; they were forced to pay interest. This meant America did very well out of the war unlike most of the other countries that were in debt and their economies were struggling. With the extra money America was gaining, people could afford to indulge themselves, people went out more, and they didn't want to stay indoors all the time. Housewives discovered a whole new world away from cooking and cleaning, with the new technology chores took less time, women could use dishwashers, washing machines and tumble dryers which gave them time to go out and entertain themselves. With the increasing demand for entertainment the profile of cinema, music and sport soon changed. America suddenly became modern, some people disapproved of this, they were outraged to see short skirts on women in films, and they thought it was setting a bad example for America but this was only the beginning. In the 1920's, when good electronic amplifiers became available cinema changed from being completely silent to having sound, these were nicknamed the talkies. The first well known 'talkie' was The Jazz singer (1927) produced by the four Warner Brothers, since then all the audience wanted to hear was the actor's voices. Charlie Chaplin (1889-1977) ...read more.

Other Swanson films include The Trespasser (1929) and Sadie Thompson (1928), she also concurred comedy with What a Widow (1930) which was regarded one of her best films. As well as cinema, music and dance became far more popular after World War 1 but jazz was the most popular style of music by far. Jazz originated in New Orleans in the 1890's by African Americans, to start with it was condemned, it was said to be the "devil's music" but it soon became extremely popular all around the world but especially in America. The 1920's were often called 'the jazz age'; they saw jazz separate from its roots of ragtime and blues to become a different, distinct style of music. One of the founders of instrumental jazz was Louis Armstrong, also known as the Satchmo, he was the first true soloist of jazz, he changed the format of jazz forever, bringing the soloist to the forefront, he was a brilliant improviser and inspired many jazz performers of the future. In his hometown of New Orleans he formed a vocal quartet with his friends, he mastered the cornet in the 1920's and became a member of the bands The Hot 5 and The Hot 7. With these bands he composed many pieces the most famous being The Potato Head Blues, St James Infirmary and Cornet Chop Suey. In 1952 he was elected the most important musician of all time by the magazine Down Beat and his success lasted until the 1960's, fifty years after he started his musical career. ...read more.

In 1935 he became the vice-president of the Boston Braves and three years later he coached the Brooklyn Dodgers of the National League. Babe Ruth was one of the best left-handed players ever, he was particularly famous for having the most home runs in one season and most home runs in one career, and these records were unbeaten for decades after his retirement. Ruth was elected to the Baseball Hall of Fame in 1936 and to this day he is still considered one of the most extraordinary baseball players the field has seen. In the picture below, Ruth is shown warming up before a game in his usual manner of his bat slung over his left shoulder Among other famous sports personalities of the same era were Bill Tilden, the American tennis player, who dominated the sport with his very powerful style. Tilden won seven United States national titles, five Wimbledon titles and many other tournaments Golf also became quite popular with Gene Sarazan (1902-1999) leading amongst the golfers; he won the United States Open and the United States Professional Golfers Association championship. He had won three significant tournaments by the time he was twenty-three. He is shown below in his later years Since the 1920's with all the new entertainment in America, society has changed an awful lot, people would have never thought that women would be wearing make-up and short skirts, listening to modern music and watching films with sound and n**e scenes in them. In one decade technology and society progressed so much the old America is almost unrecognisable. By Lauren Simpson ...read more.