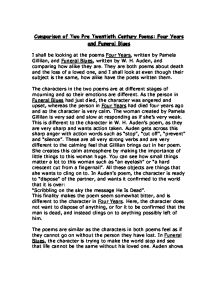 Comparison of Two Pre Twentieth Century Poems: Four Years and Funeral Blues I shall be looking at the poems Four Years, written by Pamela Gillilan, and Funeral Blues, written by W. H. Auden, and comparing how alike they are. They are both poems about death and the loss of a loved one, and I shall look at even though their subject is the same, how alike have the poets written them. The characters in the two poems are at different stages of mourning and so their emotions are different. As the person in Funeral Blues had just died, the character was angered and upset, whereas the person in Four Years had died four years ago and so the character is very calm. The woman created by Pamela Gillilan is very sad and slow at responding as if she's very weak. This is different to the character in W. H. Auden's poem, as they are very sharp and wants action taken. ...read more.

This sense of loss is also experienced in Four Years, but in the poems the characters handle it differently. Although they both obviously have suffered great bereavement, they deal with it in different ways. In Four Years, instead of mourning and giving up like the character in Funeral Blues, the character clings to the hope that there is still a possible presence of the lost one left: "But I want to believe that in the shifting house dust minute presences still drift". The title, "Four Years", suggests that is has been four years since the death of the man, and so the fact that the character is still clinging on shows how important the partner's life was to the narrator. In both poems the authors end with the characters as feeble and both seem in some ways quite pathetic. In Four Years, the character is in a state of desperation, looking for something and as meaningless to anyone else as "a flake of skin", while in Funeral Blues the character is just hopeless: "Nothing now can ever come to any good." ...read more.

Then he wants to get across how close they were, and think to himself about how important he was in his life, and then finally he wants to pack up everything. Pack up everything in the world as if it is not worth being there without his friend. Four Years is in just two paragraphs as it does not go over many different thoughts, but just shows how clingy this woman is to her husband. The emotions throughout Four Years generally remain the same, and as it isn't as long as Funeral Blues, it does not have to be broken up so much. The two poems, Four Years and Funeral Blues, both successfully leave a moving impression with the reader. I think Funeral Blues makes it easier to empathize with the character, as it is more descriptive; however Four Years still leaves the reader with great sympathy. Although they are both good poems, I feel that Funeral Blues has left a longer lasting impression with me as each individual line struck out due to the rhythm and rhyme. ...read more.