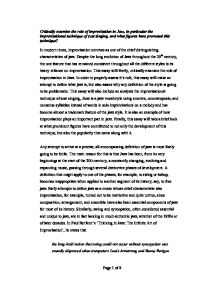 Critically examine the role of improvisation in Jazz, in particular the improvisational technique of scat singing, and what figures have promoted this technique?

Critically examine the role of improvisation in Jazz, in particular the improvisational technique of scat singing, and what figures have promoted this technique? In modern times, improvisation survives as one of the chief distinguishing characteristics of jazz. Despite the long evolution of Jazz throughout the 20th century, the one feature that has remained consistent throughout all the different styles is its heavy reliance on improvisation. This essay will firstly, critically examine the role of improvisation in Jazz. In order to properly assess it's role, this essay will make an attempt to define what jazz is, but also assess why any definition of the style is going to be problematic. This essay will also include an analysis the improvisational technique of scat singing,. Scat is a jazz vocal style using emotive, onomatopoeic, and nonsense syllables instead of words in solo improvisations on a melody and has become almost a trademark feature of the jazz style. It is also an example of how improvisation plays an important part in jazz. Finally, this essay will take a brief look at what prominent figures have contributed to not only the development of this technique, but also the popularity that came along with it. Any attempt to arrive at a precise, all-encompassing definition of jazz is most likely going to be futile. ...read more.

The form of improvisation utilized in the jazz style has changed over time. Early folk blues music often was based around a call and response pattern, and improvisation would factor in the lyrics, the melody, or both. In Dixieland jazz, musicians take turns playing the melody while the others improvise countermelodies. In contrast to the classical form, where performers try to play the piece exactly as the composer envisioned it, the goal in jazz is often to create a new interpretation, changing the melody, harmonies, even the time signature. On the other hand, rhythmic elements are strictly controlled. The leader sets the tempo, often by snapping fingers or counting off to four. As stated by Dean, "Many jazz performances contain no variation in the basic tempo -- there is no room for rubato." (1991) By the Swing era, big bands played using arranged sheet music, but individual soloists would perform improvised solos within these compositions. In bebop, however, the focus shifted from arranging to improvisation over the form; musicians paid less attention to the composed melody, or 'head,' which was played at the beginning and the end of the tune's performance with improvised sections in between. Later styles of jazz, such as modal jazz, abandoned the strict notion of a chord progression, allowing the individual musicians to improvise more freely within the context of a given scale or mode. ...read more.

(1991) He goes on to argue that The extension of vocal improvisation to include sounds formerly regarded as non-musical, such as cries, screams, sobbing and laughter, was one of the principal innovations of this period, and at times brought jazz singing close to avant-garde art music. (Dean, 1991) With the bop revival in the mid-1970s there was also a revival of interest in bop scat singing. Many young scat singers regarded themselves as belonging to the classic bop tradition." Among the best of these was Al Jarreau, who is particularly adept at creating vocal equivalents of complex jazz-rock rhythms, and Bobby McFerrin, whose wide vocal range and mobility are evident in his unaccompanied solo performances. Contemporary scat singers have shown that this vocal art can strike out in all sorts of different directions of its own, independent of developments in instrumental jazz or avant-garde music. To conclude, improvisation clearly plays a significant role in the production of Jazz music. As discussed earlier in this essay, Jazz is an extremely difficult genre to define due to its many different styles and evolutions. However, improvisation is the one feature that has remained a trademark characteristic of each different evolution throughout the 20th century. It has also been made clear that the vocal technique of scat singing is a commonly used practice in this style, and is almost completely improvisational in its nature. This further supports the claim that improvisation plays an extremely significant role in Jazz music. ...read more.