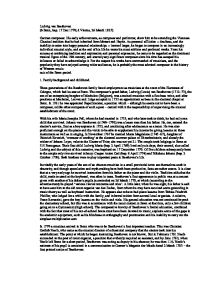 Ludwig van Beethoven, his life story and music from the Bonn peroid.

Ludwig van Beethoven (b Bonn, bap. 17 Dec 1770; d Vienna, 26 March 1827) German composer. His early achievements, as composer and performer, show him to be extending the Viennese Classical tradition that he had inherited from Mozart and Haydn. As personal affliction -- deafness, and the inability to enter into happy personal relationships -- loomed larger, he began to compose in an increasingly individual musical style, and at the end of his life he wrote his most sublime and profound works. From his success at combining tradition and exploration and personal expression, he came to be regarded as the dominant musical figure of the 19th century, and scarcely any significant composer since his time has escaped his influence or failed to acknowledge it. For the respect his works have commanded of musicians, and the popularity they have enjoyed among wider audiences, he is probably the most admired composer in the history of Western music. usic of the Bonn period. 1. Family background and childhood. Three generations of the Beethoven family found employment as musicians at the court of the Electorate of Cologne, which had its seat at Bonn. The composer's grandfather, Ludwig (Louis) van Beethoven (1712-73), the son of an enterprising burgher of Mechelen (Belgium), was a trained musician with a fine bass voice, and after positions at Mechelen, Leuven and Li�ge accepted in 1733 an appointment as bass in the electoral chapel at Bonn. In 1761 he was appointed Kapellmeister, a position which - although he seems not to have been a composer, unlike other occupants of such a post - carried with it the responsibility of supervising the musical establishment of the court. With his wife Maria Josepha Poll, whom he had married in 1733, and who later took to drink, he had only one child that survived. Johann van Beethoven (c1740-1792) was a lesser man than his father. He, too, entered the elector's service, first as a boy soprano in 1752, and continuing after adolescence as a tenor. ...read more.

quite unaware of the thunderous applause, until the contralto Caroline Unger pulled him by the sleeve and pointed to the audience behind him, to whom he then turned and bowed (Schindler and Mme Unger also remembered the moving incident, though they placed it at the end of the concert). A second performance of the symphony and the Kyrie of the mass (with some other pieces) 16 days later was much less successful. Around the time of the symphony's first performance in May 1824, Beethoven turned once more to the piano and wrote a 'cycle of bagatelles'. Unlike the earlier ones he had written (opp.33, 119), the six bagatelles of op.126 were conceived not as separate pieces but as forming a set. At the end of the year he returned to a poem that he had come to value highly. This was Matthisson's Opferlied, which he seems to have regarded (in Nottebohm's phrase) as 'a prayer for all seasons'. He had set it in 1795 and again in 1822; now he produced his final version, a setting for soprano, chorus and orchestra (op.121b). In these years, when Beethoven was hoping that his smaller pieces at any rate would prove easy to sell, he was no doubt tempted to refurbish drafts of songs written many years earlier and to put them on the market. But with the Opferlied, as with the much better-known instance of Schiller's Ode to Joy, one may detect some elements of a desire in Beethoven around this time to gather up the unfinished business of the past and attend to ideas that had waited long for definitive expression. He was already beginning to suspect that not much time was left to him. 10. 1824-7. It seems unlikely that anyone could have predicted that the remaining years of Beethoven's life would be devoted to works in a single medium - that of the string quartet. ...read more.

Bismarck himself was said to revere Beethoven; legend has it that he ordered a performance of the Fifth Symphony just before mobilizing his army. The merger of Beethoven and German politics continued apace in the 20th century. During World War I, Beethoven's music was played relentlessly in German concert halls, and there are many accounts of soldiers invoking Beethoven as an inspirational model of German heroism. Later, the Third Reich aggressively exploited the power of his music in its propaganda and even turned to Beethoven during its demise: Hitler's death was announced on German radio to the strains of the Funeral March from the 'Eroica' Symphony. Ironically, the opening motif of the Fifth Symphony, due to its rhythmic similarity to the Morse Code letter V, became associated with Allied victory, and Beethoven's music in general was immensely popular in wartime Britain. Almost half a century later, the Ninth Symphony was heard at a concert commemorating the fall of the Berlin Wall. Leonard Bernstein conducted, famously substituting the word 'Freiheit' for 'Freude' in the choral finale. Thus Beethoven's music has served throughout the last two centuries as a kind of potent and free floating moral force that can be harnessed for any number of political enterprises, from racial purity to human rights, fascistic subjugation to world brotherhood, without suffering the stigma of the collaborator. His music has survived these multifarious appropriations, just as Beethoven's status as a cultural hero has survived concerted attempts to dismantle the Beethoven myth. One cannot but accord to this music and this composer an unexampled cultural and historical force in the modern West. His music has fought wars and celebrated victories, consoled and scorned, empowered and overmastered. It is indeed difficult, if not impossible, to imagine a time when Beethoven's music will not continue to exercise its paradoxically confounding and foundational force. Perhaps when that happens, the Western world will truly have passed into another age. ...read more.