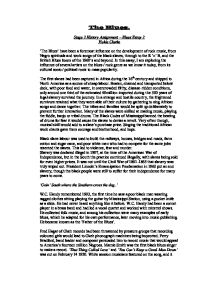 The Blues. Stage 2 History Assignment - Blues Essay 2 Vickie Clarke 'The Blues' have been a foremost influence on the development of rock music, from n***o spirituals and work songs of the black slaves, through to the R 'n' B, and the British Blues boom of the 1960's and beyond. In this essay, I am exploring the influence of several artists on the blues / rock genre as we know it today, from its cultural socio / political roots to mass popularity. The first slaves had been captured in Africa during the 16th century and shipped to North America as a source of cheap labour. Beaten, chained and transported below deck, with poor food and water, in overcrowded filthy, disease-ridden conditions, only around one third of the estimated 40million imported during the 300 years of legal slavery survived the journey. In a strange and hostile country, the frightened survivors retained what they were able of their culture by gathering to sing African songs and dance together. The tribes and families would be split up deliberately to prevent further interaction. Many of the slaves were skilled at making music, playing the fiddle, banjo or tribal drums. The Black Codes of Mississippi banned the beating of drums for fear it would cause the slaves to devise a revolt. Very often though, musical skill would add to a slave's purchase price. Singing the traditional African work chants gave them courage and brotherhood, and hope. Black slave labour was used to build the railways, houses, bridges and roads, farm cotton and sugar cane, and poor white men who had to compete for the same jobs resented the slaves. This led to violence, fear and murder. Slavery was declared illegal in 1807, at the time of the American War of Independence, but in the South the practice continued illegally, with slaves being sold for even higher prices. ...read more.

But the records indicate that Lead Belly was not pardoned, but more exactly released under "double good time" measures adopted to save costs, and there is no evidence that the song played any part in his release, or gained him any particular favour from the governer. So he claimed, such was his talent, that twice he had received official pardons for singing for the prison governor. The Lomaxs' recorded and published his vast repository of songs, and from this, Lead Belly carved himself a new career travelling concert halls and folk clubs, travelling to New York in 1934 where he caused a sensation, and much publicity was made from newspaper reports of his past history. He played at elite universities to musicologists where his performances of archaic slave songs, his scars, and convict past made him an object of fear and admiration. He was encouraged to dress as an typical black n***o slave worker, barefoot in dungarees so the image would be complete, and played a twelve string guitar. The Lomaxs' rented him a house in Connecticut , and he sent for an old girl friend from Louisiana, Martha Promise, who he married. He had become such a star by than, that his wedding made the newsreels. White audiences considered him the archetypal black blues singer, though he was not very popular with black audiences, to whom to was a reminder of a past they wanted to forget. Maybe his time in prison had caused him to be out of touch with the liberated blacks of the 30's, but the records he issued for the 'race market' during the decade sank without trace. He was encouraged to record blues records for the white market, but before long disagreements led to a split between John Lomax and Lead Belly, so he returned again home to Louisiana, and engaged a lawyer in a royalty battle with Lomax over the book on black folk music he was due to publish. ...read more.

She also worked with more sophisticated musicians, including Louis Armstrong, Coleman Hawkins, and her regular pianist 'Georgia' Tom Dorsey, many of whom were popular recording artists in their own right. Tom Dorsey also composed a lot of her songs - she had a repertoire consisting of songs by professional song writers, traditional blues and song she had written herself which reflected the lives of the people in the south. One of her most popular songs was 'Chain Gang Blues', written by Charlie Parker and Spencer Williams, and 'Bo Weevil Blues' with Lovie Austin and the Blue Seranaders. Unfortunately most of her songs were roughly recorded and have not stood the test of time. The poor technical quality of her recordings have sadly inhibited her appeal to modern listeners. As the race record market expanded in the mid 1920's, with blues and gospel records being released at an average of ten per week, the record companies sent out talent scouts to bring in talented new artists to satisfy the soaring demand for new music. Record store owners were always ready to recommend some new singer or guitarist. Sometimes the singer was taken north to record in a studio, but more often than not, they would be recorded in the field on portable equipment. The portable equipment was notoriously unreliable, the new carbon microphones were affected by heat and would begin to crackle, so had to be kept on ice. Even the vibrations of the artists stamping their feet could ruin a recording and waste time and resources. They used unsuitable venues to record such as barns, churches and roller skating rinks. During the 30's, public musical tastes had changed and left her behind, so she retired from the public eye in 1935, instead dividing her time between the running of two theatres in Georgia, encouraging and mentoring new talent. She also was deeply involved with the Congregation of Friendship Baptist Church where her brother was a deacon. She died in 1939 of heart disease, unrecognised for her work. Her death certificate simply listed her occupation as 'housekeeping'. ...read more.