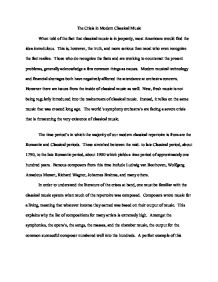 The Crisis in Modern Classical Music

The Crisis in Modern Classical Music When told of the fact that classical music is in jeopardy, most Americans would find the idea incredulous. This is, however, the truth, and more serious than most who even recognize the fact realize. Those who do recognize the facts and are working to counteract the present problems, generally acknowledge a few common things as causes. Modern musical technology and financial shortages both have negatively affected the attendance at orchestra concerts. However there are issues from the inside of classical music as well. New, fresh music is not being regularly introduced into the mainstream of classical music. Instead, it relies on the same music that was created long ago. The world's symphony orchestra's are facing a severe crisis that is threatening the very existence of classical music. The time period's in which the majority of our modern classical repertoire is from are the Romantic and Classical periods. These stretched between the mid- to late Classical period, about 1790, to the late Romantic period, about 1900 which yields a time period of approximately one hundred years. Famous composers from this time include Ludwig van Beethoven, Wolfgang Amadeus Mozart, Richard Wagner, Johannes Brahms, and many others. ...read more.

One unexpected use of the Internet that has prompted heated debate is file sharing, especially of music files called MP3's. People can use music sharing programs like the late, and controversial, Napster, Morpheus, and Kazaa to easily to find the songs that they want and download them right onto their computer. While the recipient of this free music is satisfied, record companies and artists are not receiving a dime for their work.. Now, not only are people not going to hear concerts, they are not even paying for the music to begin with. This presents a double financial burden to orchestra's. Even with the crisis outlined above concerning technological pressures, symphony orchestra's could probably still rally back and survive financially without excessive effect. It is in this next topic that the real danger to a symphony is found. In its most general terms, people are not buying season ticket subscriptions to orchestra's in the same number that they used to. Consumers are reluctant to lock themselves into attending certain concerts and performances months, if not a year in advance which might eventually conflict with a later event that might prevent them from attending. Another major source of funds for orchestras', donations from supporters, is not as substantial as in years past. ...read more.

This is stagnation in its most obvious form. Besides the problem with the music selection itself, orchestra's have another issue to contend with. The people that are regularly attending concerts are slowly aging. A study by the National Endowment for the Arts reported that "attendance at classical music performances is highest among those born between 1936- 45 and lowest in the oldest and youngest (age groups). What this means is that most attendees are into their retirement ages. Unless new younger audiences can be attracted in enough numbers to offset, and hopefully overtake the numbers that will be lost, orchestras will be in desperate search of paying customers. Classical music, one of the oldest and most cherished forms of musical art, is in danger. No longer are the days where concert halls are filled to overflowing every weekend matinee, but times are now when orchestras are faced with low attendance and heavy financial debts. The spectrum of music played is dwindling; new, exotic music is scorned and forbidden by the general public. But there is hope. Just as minimalistic and impressionistic art are slowly becoming accepted in art galleries and city parks, maybe the acceptance will move to classical music. If it does, we can expect to keep classical music from being reduced to a mere stack of CDs to a once again thriving and flourishing cultural idiom. ...read more.