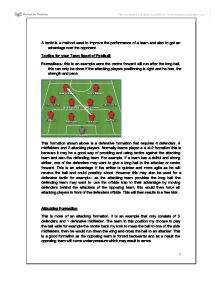 A tactic is a method used to improve the performance of a team and also to get an advantage over the opponent. Tactics for your Team Sport of Football Formations- this is an example were the centre forward will run after the long ball, this can only be done if the attacking players positioning is right and he has the strength and pace. This formation shown above is a defensive formation that requires 4 defenders, 4 midfielders and 2 attacking players. Normally teams player a 4-4-2 formation this is because it may be a good way of providing and using tactics against the attacking team and also the defending team. For example, if a team has a skilful and strong striker, one of the defenders may want to give a long ball to the attacker or centre forward. This is an advantage if the striker is quicker and more agile as he will receive the ball and could possibly shoot. However this may also be used for a defensive tactic for example- as the attacking team provides the long ball the defending team may want to use the offside trap to their advantage by moving defenders behind the attackers of the opposing team, this would then force all attacking players in front of the defenders offside. This will then results in a free kick. Attacking Formation This is more of an attacking formation. It is an example that only consists of 3 defenders and 1 defensive midfielder. The team in this position my choose to play the ball wide for example the centre back my look to mass the ball to one of the side midfielders, then he would run down the wing and cross the ball to an attacker. This is a good formation as the opposing team is forced backwards and as a result the opposing team will come under pressure which may result in errors. ...read more.

This would have given the goal keeper less time to react and thus could have resulted in a goal. Man Marking and Zone Marking - the player from Marsden was comfortably able to move around the pitch as no Pendle Vale defender was marking him. To improve on this the defender should stay close to the attacker, thus giving him less room to pass the ball and to create any possible chances. By man-marking a player closely it forces even the best attacker to make mistakes in the game because the striker's team mates know he may be forced into making an error because of the pressure he is under from the defender. Pendle Vale could have reduced the threat that Marsden Heights posed by zone marking. This also did not happen and Marsden Heights were able to play into the danger zones. To improve zone marking, the right back defender should use his intelligence by marking a zone where Marsden Heights like to play. For example, Marsden Heights seemed to like playing on the wing and then crossing the ball, if a defender is already on the wing, it may cause the team to play into a less dangerous zone. This would improve zone marking. Another error I realised was that Marsden Heights posed to much of a threat at goal to Pendle Vale. To improve this Pendle Vale should have used zone marking. To do this the right back should have used his understanding of the game and marked the zone where Marsden Heights were likely to cross or pass the ball. For example, Marsden Heights seemed to like playing through middle and then having a go at goal, if a centre back is already there, it may cause the team to play a less dangerous pass and there for created less threat, this would have improved zone marking. Counter Attacking - I also noticed that Pendle Vale's counter attacking was inadequate; I felt the players were not sprinting to their potential and the ball was not cleared fast enough by the defenders. ...read more.

Furthermore, a drop shot should only be taken when the player is at the back of the court and to ensure this Charlie should have disguised his shot by pretending that he was about to hit a normal shot into the air, when in actual fact he goes for the drop shot. This would have been a smart tactic. Short and Long Serve - Andrew did not play a good short serve against Mark. The shuttle was going to high over the net which gave Mark time to react. This is a good tactic but only when played minimum height and power. He should disguise the shot when playing a short serve; his short serve should go just over the net and preferably hit the edge of the box. Also by disguising the shot, Mark may think he is playing a long serve which causes him to take a few steps back, but in actual fact Andrew should hit a short serve which may win him the point. Service- Charlie serve technique was poor against Bob. When serving he did not change his technique, and also it was going to high, this meant that Bob had enough time to react to it and had many options, this is not a good tactic as Bob could have returned it with a smash. To improve on this Charlie should have hit his serve with minimal power so that it goes over the net and just into the baseline (preferably at the edge of the box). This would have prevented Bob hitting a smash and as a result forcing him to hit it in the air. Also to ensure a good service he could have disguised the shot by pretending to hit a high shot in the air when in actual fact he does the opposite this, would have given Bob less time to react as he would have been ready for a high serve. He could have also used the disguise shot for a long serve by doing the opposite for what he did with his short serve. ?? ?? ?? ?? 1 ...read more.