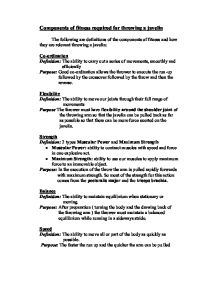 Components of fitness required for throwing a javelin.

Components of fitness required for throwing a javelin The following are definitions of the components of fitness and how they are relevant throwing a javelin: Co-ordination Definition: The ability to carry out a series of movements, smoothly and efficiently Purpose: Good co-ordination allows the thrower to execute the run-up followed by the crossover followed by the throw and then the reverse. Flexibility Definition: The ability to move our joints through their full range of movements Purpose The thrower must have flexibility around the shoulder joint of the throwing arm so that the javelin can be pulled back as far as possible so that there can be more force exerted on the javelin. Strength Definition: 2 types Muscular Power and Maximum Strength * Muscular Power: ability to contract muscles with speed and force in one explosive act. * Maximum Strength: ability to use our muscles to apply maximum force to an immovable object. Purpose: In the execution of the throw the arm is pulled rapidly forwards with maximum strength. So most of the strength for this action comes from the pectoralis major and the triceps brachia. Balance Definition: The ability to maintain equilibrium when stationary or moving. Purpose: After preparation ( turning the body and the drawing back of the throwing arm ) the thrower must maintain a balanced equilibrium while running in a sideways stride. Speed Definition: The ability to move all or part of the body as quickly as possible. Purpose: The faster the run up and the quicker the arm can be pulled forwards then the further the javelin can be thrown Warm up and Cool Down Why Warm Up Warming up before a sporting activity or my event is crucial. This is because it prepares the body for physical activity. If we perform a light exercise before performing in a physical activity then we reduce the build up of lactic acid. ...read more.

You will receive, Uka: Coach pass Uka: licence Level 2 Description: The UK athletics level 2 coaching award consists of a two day activity, a one day event group module and an assessment. Gaining your UK athletics level 2 coaching award will qualify and insure you to work unsupervised in a selected group of events whilst enhancing your coaching skills. For a third day of level 2 course, you can select one of the following modules to specialize in. Modules: Speed Jumps Endurance Throws Children in athletics Fitness in running and walking. UKA - United Kingdom Athletics The national governing body of my sport is the UKA which accounts for athletics in the whole of the United Kingdom (i.e. England, Wales, Scotland and Northern Ireland). Information on UKA Headquarters: Edgbaston, Birmingham Address: Uk athletics Athletics House 10, Harborne Road Edgbaston BIRMINGHAM B15 3AA Tel: 0121 456 5098 Fax: 0121 456 8752 Web: www.ukatheltics.net Athletics in Britain used to be under the BAF (British Athletic Federation) but in January 1999 it was officially changed to UK Athletics. The UK organisation represents a new era for the sport and focuses on three main elements. 1) A dedicated performance structure 2) A new framework fro development work 3) A competition structure that truly meets the needs of all levels of athlete. UKA's aim is to co - ordinate and support rather than intervene and control and has made all appointments based on competence and skills. The structure of My Governing Body: UK Sport UK Athletics Regional/Member Associations Local clubs/Schools Athletics in Cheshire centre around the clubs of which there are 21 in total. About nine of these are affiliated for track and field (which is suitable for my event.) about 17 of them for road running and three of them are centred at a synthetic athletics track. The current funding and support for UK athletics is provided by the following sources * Norwich Union * BBC Sport * UK Sport * Reebok * Sponsorship sources * Commercial and non commercial revenue streams. ...read more.