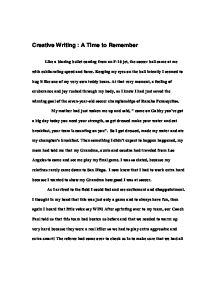 Creative Writing : A Time to Remember

Creative Writing : A Time to Remember Like a blazing bullet coming from an F-16 jet, the soccer ball came at me with exhilarating speed and force. Keeping my eyes on the ball intently I seemed to hug it like one of my very own teddy bears. At that very moment, a feeling of exuberance and joy rushed through my body, as I knew I had just saved the winning goal of the seven-year-old soccer championships of Rancho Penasquitos. My mother had just woken me up and said, " come on Gabby you've got a big day today you need your strength, so get dressed make your water and eat breakfast, your team is counting on you". ...read more.

I thought in my head that this was just only a game and to always have fun, then again I heard that little voice say WIN! After sprinting over to my team, our Coach Paul told us that this team had beaten us before and that we needed to warm up very hard because they were a real killer so we had to play extra aggressive and extra smart! The referee had come over to check us in to make sure that we had all the right equipment on so we wouldn't hurt ourselves or hurt others. After that he gave us a two-minute warning so we could be ready. Two minutes was up and the game had started. I was so unstoppable and pumped up that I felt like I was super woman. ...read more.

Every shot they took it was either denied or saved. The referee had blown the whistle for half time. When our team had come off the field we were sweating like pigs. Our coach had told us that we were doing awesome, but not to get cocky because they could come back and score. In my little head I thought "fat chance". Time flew and in the last thirty seconds of the game, right out of nowhere a ball blazing like a bullet came right at me! Had I saved it or had it gone in? Afraid to open my eyes I felt something round in my hand. Could it be? As I slowly opened my eyes everyone was in silence and when I looked down there it was right in my arms. Now I really felt like superwoman because it was a time to remember. What could be better than sweet victory? ...read more.