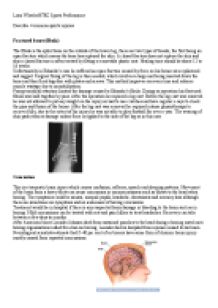 ﻿Liam WheelerBTEC Sports Performance Describe 4 common sports injuries Fractured bones (fibula) The fibula is the splint bone on the outside of the lower leg, there are two types of breaks, the first being an open fracture which means the bone has ruptured the skin. A closed fracture does not rupture the skin and also a closed fracture is often treated by fitting a removable plastic cast. Healing time should be about 12 to 16 weeks. Unfortunately in Eduardo?s case he suffered an open fracture caused by force so his bones were splintered and ragged. Surgical fixing of the leg is then needed, which involves a large nail being inserted down the bone and then fixed together with plates and screws. This method improves recovery time and reduces muscle wastage due to immobilisation. Prompt medical attention limited the damage caused to Eduardo?s fibula. ...read more.

The symptoms could be nausea, unequal pupils, headache, drowsiness and memory loss although there are sometimes no symptoms and no awareness of having concussion. Treatment would be in hospital if there is any suspected brain damage or bleeding to the brain such as in boxing. Mild concussions can be treated with rest and pain killers to treat headaches. Recovery can take between a few days to months. After American boxer Leander Johnson died from sustained punches to the head during a boxing match anti boxing organisations called for a ban on boxing. Leander died in hospital from injuries caused to his brain. Neurological scientists estimate that15-40 per cent of ex boxers have some form of chromic brain injury mostly caused from repeated concussions. Muscle strain (hamstring) ...read more.

The recovery time for such an injury varies greatly depending on the severity; it could be anything from a few days to many months. Bruising Bruising can be sustained in almost any sport; a bruise is caused by vascular leakage of red blood cells into tissue. (Bleeding beneath the skin) this causes discolouration on the surface of the skin. The bruise changes colour as it heals such as brown and yellow, some creams (which contain vitamin K) can speed up healing. Bruises would not interfere with sporting activity unless they extend to a large area such as a whole leg. They are usually painful to touch and can be swollen but usually heal very quickly. Applying cold packs or ice to area aids with healing and pain. The World champion judo fighter, Mike Swain has sustained many bruises during his career, as do many judo fighters. The bruising has never interfered with him being able to partake in a judo match. ...read more.