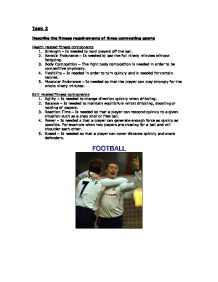 * Boxers at times can need a higher level of muscular endurance than the other two sports. The other two sports are team games, so a player can have a little team in order to rest. With boxing a boxer is fighting at a very intense level for 3 minutes the equivalent would be to have a footballer or Ice hockey player hold on to the ball or puck for three minutes. It's never going to happen so they need muscular endurance in a different sense to boxing. * Agility is needed a little bit more in football than boxing and Ice Hockey. A goalkeeper is for more athletic than a goaltender and needs to be more agile. The player themselves have to be more agile as footballers are constantly challenging in the air and contending for headers. * Goalkeepers need a greater deal of flexibility than goaltenders as they have a greater distance to cover in which to perform saves. * Reaction time is needed more in Ice Hockey and boxing than football. A rink is smaller than a football field and the puck is in play a lot more than a football. Ice hockey is player at a more frenetic pace, therefore reaction time must be at an all time high. In boxing a mistake in reaction time is the difference between getting knocked out or not. You can maybe make a mistake with reaction time in the other two sports and only concede a goal which is recoverable. In boxing one punch and you can be out. ...read more.

Body composition is the most important component in Ice hockey as you have to be a big man to play in many of the positions because you are allowed to check (skate into a player to try and knock him down) and board people (skate into somebody and knock them into the edge of the ice rink). If that wasn't enough if you are a small guy, fighting is allowed as long as you "drop your gloves". So because ice hockey is such a physical game you need to wear a lot of armour to avoid injury and having the right body composition is a must. In boxing body composition is the most important component. The ability to be able to put on weight quickly after a weight in is an envious talent. In a fight in 1998 between Arturo Gatti and Joey Gamache, Gatti had put on a staggering 19lbs since the weigh-in. Gatti boasted a frightening 16lbs advantage over Gamache. For a welterweight that represents an extra 10% of body mass, an enormous amount. Watching the fight myself, I was immediately struck by how much larger Gatti was than Gamache. Chest, biceps, forearms, neck, shoulders, back, legs - in every part of the body where a fighter generates strength and punching power, Gamache was dwarfed. Gatti was teeing off at will, and a series of frightening knockdowns later, Gamache was left stretched on the canvas. He later announced he would never fight again. It illustrates how important this component is in boxing because it legal to do this, anyone using their body composition to their benefit can effectively cheat their way to the top. ...read more.

This is incredibly thorough and in general constructed logically. The sections follow on from each other and make sense.

There are many examples used to support the points and references to known elite performers for the same reason.