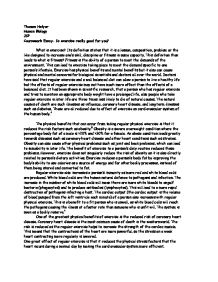 What is exercise? Its definition states that it is a lesson, composition, problem or the like designed to increase one's skill, discipline or fitness in some capacity. This definition then leads to what is fitness? Fitness is the ability of a person to meet the demands of the environment. This can lead to exercise taking place to meet the demand specific to one person's lifestyle. Exercise has physical benefits and mental benefits but it also can cause physical and mental concerns for biological scientists and doctors all over the world. Doctors have said that regular exercise and a well balanced diet can allow a person to live a healthy life but the effects of regular exercise may not have much more affect than the effects of a balanced diet. It has been shown in scientific research, that a person who has regular exercise and tries to maintain an appropriate body weight have a prolonged life, also people who take regular exercise in later life are three times less likely to die of natural causes. The natural causes of death are such illnesses as influenza, coronary heart disease, and long-term illnesses such as diabetes. These are all reduced due to effect of exercise on cardiovascular system of the human body.4 The physical benefits that can occur from taking ...read more.

Exercise increases the bone mineral density. This will strengthen bones and reduce the risk of developing osteoporosis. Osteoporosis is a disease in which bones become fragile and more likely to break. If not prevented or if left untreated, osteoporosis can progress painlessly until a bone breaks. An active person has less risk of developing some forms of cancer, for example breast cancer is less common in physically active women than it is in inactive women. The risk is reduced due to exercise reducing the level of oestrogen produced by the ovaries. High oestrogen levels have been linked to being a cause of breast cancer. Exercise does also produce physical risks. Exercise places very different demands on a person's bodily system1. As stated above, exercise helps to maintain body mass by burning calories. An average man who does regular exercise burns between 2000 and 3000 calories a week. These men have significantly lower numbers of death at an early age than men who don't exercise do. But men, who do extensive amounts of exercise in a week and burn more than the 3000 calories a week, the protective effect of a healthy body is lost and death rates start to increase. ...read more.

People who do physical activities and exercise can manage their stress levels a lot better than people who do not exercise can. Therefore people who have regular exercise end up being less 'stressed'. Stress is reduced as the body produces endorphins and these stimulate happiness. Exercise is also known to relieve depression. It stimulates the release of endorphins. These endorphins help to trigger the chemical, which controls mood in the brain.4; A person's self esteem can also be greatly lifted by competing in physical activities. A great risk is that people become obsessed with exercise and become fanatics. They become obsessed with what they feel is peak physical condition and end up going to any length to get to this level. This can cause physical problems such as the body is working so hard that the positive factors gained from exercise are cancelled out and these then become negative factors. I conclude that in general, exercise has physical and mental benefits and these benefits are greater than the risks that are associated with a lack of exercise or too much exercise. This is only true as long as the exercise is completed within moderation and that it is not too strenuous. Also that the person has a recovery period. Thomas Helyar Human Biology JIP Coursework Essay- Is exercise really good for you? ...read more.