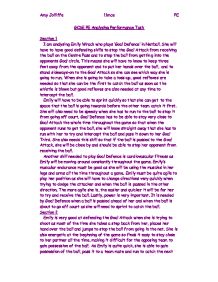 GCSE PE Analysing Performance Task Section 1 I am analysing Emily Wrack who plays 'Goal Defence' in Netball. She will have to have good defending skills to stop the Goal Attack from receiving the ball on the Centre Pass and to stop the ball from getting into the opponents Goal circle. This means she will have to know to keep three feet away from the opponent and to put her hands over the ball, and to stand sideways-on to the Goal Attack so she can see which way she is going to run. When she is going to take a toss-up, good reflexes are needed so that she can be the first to catch the ball as soon as the whistle is blown but good reflexes are also needed at any time to intercept the ball. Emily will have to be able to sprint quickly so that she can get to the space that the ball is going towards before the other team catch it first. She will also need to be speedy when she has to run to the ball to stop it from going off court. Goal Defence has to be able to stay very close to Goal Attack the whole time throughout the game so that when the opponent runs to get the ball, she will know straight away that she has to run with her to try and intercept the ball and pass it down to her Goal Third. She also needs this skill so that if the ball is passed to the Goal Attack, she will be close by and should be able to stop her opponent from receiving the ball. Another skill needed to play Goal Defence is cardiovascular fitness as Emily will be moving around constantly throughout the game. Emily's muscular endurance must be good as she will be using the muscles in her legs and arms all the time throughout a game. ...read more.

Emily will also need to do exercises that improve her strengths so there is a training practise that could help her: 1. There is a group of three people, player one has the ball, player two is defending player three. The defender has to stand side-on to player three so that she can see the ball and the person she is defending. Player three has to avoid the defender and run either left or right and signal where she wants to catch the ball. This is a defending practise where the players have to learn to stand sideways-on to their opponent where it is easier to defend and catch the ball. Different types of training are needed to help Emily improve her strengths and weaknesses. Interval training is when there is a jog/sprint/swim, etc for a certain, short period of time and then a short break. It is then repeated over and over again. This could help Emily become more powerful in a game situation as she will have a break when the ball is in her team's goal circle and when the ball is back in her area, she will have the energy and power to sprint towards the ball and catch it then have a break when she is not needed and so on. Weight training would help Emily's muscular endurance. If she uses weights for a certain amount of time and then improves so can use heavier weights for a longer amount of time, then her muscular endurance will improve. She will then be able to last longer in a game without her muscles aching. Continuous training involves jogging/swimming constantly for a period of time. If Emily used continuous training, she would soon improve and be able to run further without becoming tired which would improve her stamina which is one of her weaknesses. In a game, she would then be able to run for longer periods of time which would help her team. ...read more.

If you have to walk to get there, you may already be quite tired by the time you have to play but if you are taken by car, your energy levels will be higher. Also, if you have a friend in a team with you or somebody watching, they will motivate you and relax you more so you may play better. However, there are social aspects that can cause you to perform worse than you may have liked. If you don't really get on well with your team mates you won't feel as comfortable playing with them which may affect your performance. Also, if you have had an argument with someone before-hand or just have a lot on your mind, your mind will not be entirely focused on the game so you won't play as well. You may also become quite nervous before doing any sport. Depending on how nervous you become, this can affect your performance in a positive or negative way. If you become too nervous or hardly nervous at all, this may mean that you will play at your worst but if you get quite nervous, it may cause you to play at your optimum. This can all be shown on an arousal graph. Section 7 If Emily had done the six week training programme, I would expect to see quite a big difference in her performance in netball. I would expect that her stamina would be better and that she would be able to play most of the game without tiring instead of getting tired in the first half. This is because she has done lots of fartlek training and over the weeks the amount of time that she had been running had increased. I would be able to look at the difference between her first agility and bleep test and 12 minute run if she had improved her time. I think that she would have improved in all fitness areas as she will have done lots of different sessions to practise and develop strengths and weaknesses. ?? ?? ?? ?? Amy Jolliffe 11mce PE ...read more.