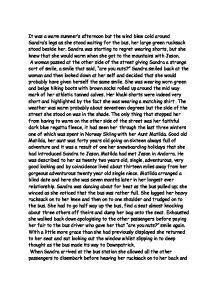 It was a warm summer's afternoon but the wind blew cold around Sandra's legs as she stood waiting for the bus, her large green rucksack stood beside her.

It was a warm summer's afternoon but the wind blew cold around Sandra's legs as she stood waiting for the bus, her large green rucksack stood beside her. Sandra was starting to regret wearing shorts, but she knew that she would warm when she got to the mountains with Jason. A woman passed at the other side of the street giving Sandra a strange sort of smile, a smile that said, "are you nuts?" Sandra smiled back at the woman and then looked down at her self and decided that she would probably have given herself the same smile. She was wearing worn green and beige hiking boots with brown socks rolled up around the mid way mark of her athletic tanned calves. ...read more.

Matilda had met Jason in Andorra. He was described to her as twenty two years old, single, adventurous, very good looking and by coincidence lived about thirteen miles away from her gorgeous adventurous twenty year old single niece. Matilda arranged a blind date and here she was seven months later in her longest ever relationship. Sandra was dancing about for heat as the bus pulled up; she winced as she noticed that the bus was rather full. She lugged her heavy rucksack on to her knee and then on to one shoulder and trudged on to the bus. She had to go half way up the bus, find a seat almost knocking about three others off theirs and dump her bag onto the seat. ...read more.

Sandra smiled back "Hey baby how are you? All set?" " Yeah" he replied, " I did tell you we were only staying overnight, right?" he said jokingly. Sandra helped him throw the bag in the boot. "My mum always says that you're better looking for at things than looking for them!" "True" he snorted "but your mum never had to carry them all up the mountains!" He was right "well if you are going to ridicule me then you can't borrow any of my things when you need them or realise that you have forgotten them". With that he reached his arms around her and planted a big kiss on her forehead she reciprocated by grabbing his b*m! "Get in the car silly" She obeyed walked round to the passenger side opened the car sat down and plugged her belt in. ...read more.