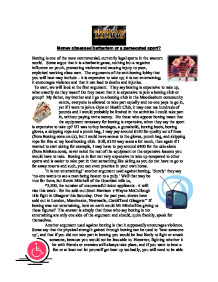 Money obsessed barbarism or a persecuted sport? Boxing is one of the most controversial, currently legal sports in the western world. Some argue that it is a barbaric game, nothing but a negative influence on youth, promoting violence and causing injury to poor, exploited working class men. The arguments of the anti-boxing lobby that you will hear may include - it is expensive to take up; it is not entertaining; it encourages violence and that it can lead to deaths and injuries. To start, we will look at the first argument. They say boxing is expensive to take up, what exactly do they mean? Do they mean that it is expensive to join a boxing club or group? My father, my brother and I go to a boxing club in the Moodiesburn community centre, everyone is allowed to take part equally and no-one pays to go in, yet if I were to join a Gym or Health Club, it may cost me hundreds of pounds and I would probably be limited in the activities I could take part in, without paying extra money. ...read more.

Some say that the physical strength gained through boxing can be used to 'beat someone up', and that if you did not take part in boxing you would be less likely to fight or attack someone, because you would not be less able to. However, fighting whether it be with friends or enemies will always take place, and if you want to beat a foe or at least not let yourself get beat up too badly, you will need to be able to defend yourself. Also, I believe that boxing helps to prevent fighting as it creates a chance for the participant to channel their frustration and anger, through their hands, away from their minds. I believe that this is better than fighting with people outside of the ring, because at the ring there are safety measures which are non existent in normal world. Finally, we come to the argument that boxing may cause deaths and injuries. This is generally thought to be the most important point against boxing and can be backed up by doctors and others in the medical profession. ...read more.

I believe that the choice of whether to take part in boxing or not, is the choice of the boxer him or herself. Article 23 of the Universal Declaration of Human Rights states, "Everyone has the right to work, to free choice of employment" if people were not allowed to take part in boxing, I believe that it would be a violation of this Human right. If boxing was banned, I truly think that it would go underground. I believe this because, even in this day where police are constantly developing better forms of surveillance and intelligence gathering, banned activities such as bare-knuckle boxing and c**k-fighting still go on, and what about the thousands of loyal fans who I talked about earlier, I think many would be prepared to break the law to watch their favourite sport. If boxing did go underground, then it would loose it's present level of safety and the sport would become even more dangerous than it is now. I believe that boxing is a persecuted sport and should be encouraged instead of discouraged, I hope that the sport will carry on for a log time to come and gain more support from those who at present are against it. By Kai Campbell ...read more.