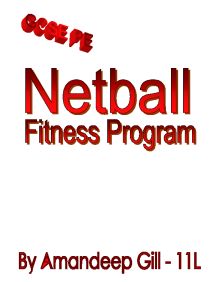 Introduction I have chosen to do a fitness program for a sport. I chose the sport netball. I have chosen this sport, as I am more familiar with what is involved in terms of training, warming up, cooling down and so on. The main fitness components, I think that are involved in Netball are; 1. Stamina 2. Speed 3. Skill 4. Agility I play in a defence position, so I will try to aim all my exercises at that. In terms of the FITT acronym (Frequency, Intensity, Time, Type), I spent 4 weeks on this fitness program, set myself a higher target every week to beat or reach, and tried to make all of my exercises compatible with my sport. About The Sport The Game Netball is a team game, played by two teams of seven players and based on throwing and catching. A team may consist of up to 12 players. Each player has a playing position that is determined by the areas on the court where she may move or play. Their position is shown by letters worn on a bib above the waist, on the front and the back of the player, for example GA - Goal Attack, C - Centre, GK - Goal Keeper, etc. The aim of the game is to score as many goals as is possible from within an area called the Goal Circle, which is a semi-circle, in the middle of the goal line and measuring 4.9 metres (16 ft) ...read more.

Do the same for the right. Lift your arm over above your head and gently push down with other arm for 5 seconds, then swap arms Put one arm straight across your chest and gently push your elbow and hold for five seconds and again with your other arm Legs a little apart and stretch your arm down gently and hold for five seconds and do same with other side One foot in front of the other and gently push the forward leg back, putting your hands on top for support, you should feel a stretch on the forward leg and hold for five seconds. The back leg should be slightly bent too. Change legs and do the same. Again, one foot in front of the other and lean forward the back leg should feel stretched and the front leg should be slightly bent. Rotate both ankles for five seconds, both in clockwise and anti-clockwise directions. Also do this with wrists. The warm up is now completed Why do we have to warm up? Warm-up exercises should precede any practice or competition; they make the muscles work more efficiently by increasing their temperature. This prevents injury to muscles, tendons and ligaments; and increases blood flow to the heart and active muscles. The warm-up should be progressive, increasing in intensity until the exertion level of practice or competition is reached. Routine I have planned out a circuit, which I followed for four weeks. ...read more.

I wasn't too happy with the way I set it out and the activities I chose, as I thought that they weren't very netball related. I should have done more of the Plyometric exercises seeing as they were specified to just netball. I only had five Plyometric exercises I could choose from but use only two (Single-Leg Push Off & Depth Jump). Another thing I wasn't too pleased about was my warm-up. I thought I could have put in more netball needed stretches and runs. I did side step and so on, but I felt I didn't do it enough. I ran more, but I think that I should have concentrated more on things like running/sprinting short distances and to run back (being able to change direction at speed - agility). I should have done more side stepping and jogged down to a walk before stretching. When I stretched I don't think I could have done more. The stretches I did were the exact same I do when I train and do before a match. I go to a practice with a league club in Coventry. I felt that my fitness programme did have a lot of influence from that, and I think that I gained a lot of help from it for my programme. I didn't refer my routine much to FITT or SPORT. I did refer to it, but not as much as I felt I should have. This circuit, also, would have worked better, if I had stuck to a proper diet, while training. ?? ?? ?? ?? Amandeep Gill 11L GCSE PE Mrs Youett 2 ...read more.