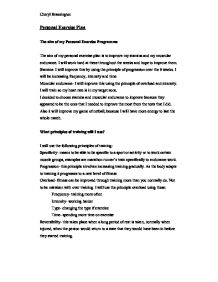 Personal Exercise Plan The aim of my Personal Exercise Programme The aim of my personal exercise plan is to improve my stamina and my muscular endurance. I will work hard at these throughout the weeks and hope to improve them. Stamina- I will improve this by using the principle of progression over the 6 weeks. I will be increasing frequency, intensity and time Muscular endurance- I will improve this using the principle of overload and intensity. I will train so my heart rate is in my target zone. I decided to choose stamina and muscular endurance to improve because they appeared to be the ones that I needed to improve the most from the tests that I did. Also it will improve my game of netball, because I will have more energy to last the whole match. What principles of training will I use? I will use the following principles of training: Specificity- means to be able to be specific to a sport or activity or to work certain muscle groups, examples are marathon runner's train specifically to endurance work. Progression- this principle involves increasing training gradually. As the body adapts to training it progresses to a new level of fitness Overload- fitness can be improved through training more than you normally do. Not to be mistaken with over training. I will use the principle overload using these: Frequency- training more often Intensity- working harder Type- changing the type if exercise Time- spending more time on exercise Reversibility- this takes place when a long period of rest is taken, normally when injured, when the person would return to a state that they would have been in before they started training. How will I apply the principles of training? Like the marathon runner I will train specific to endurance work. I will build my progression up, hopefully getting my fitness to a higher level. ...read more.

The games were played 5 minutes each way. In the netball practice we mixed the year teams up so we had a variety of ages and ability on each team and played a match. The 2 activities lasted 2 hours in total Results from activity The games were played and to make sure I was working in the right zone I monitored my heart rate throughout the netball practice. My heart was in the right zone for most of the practice however on few occasions when the ball was down in the attacking half of the other teams for a while, then it went slightly out of the correct zone. What did I find out from my results? What could I do next time? I found out that netball requires both of the energy systems being used to be able to play the game to the best of the positions ability. That isn't a bad thing it just needs a lot dedication to the sport. Session 2- fitness lesson (in PE lesson) The activity consisted of: * A warm up The warm up that is stated in my typical warm up. * The rowing machine I spent 10 minutes on the rowing machine. I changed the gear that I had been using in the last two weeks to the number 8 from 7. I found this all right, and I kept the speed the same. * The bicycle I spent 10 minutes on the bike. I kept everything the same as the week before I am stronger with my arms on the rower then I was with my legs on the bike so that's why I changed the settings I had on the rower and not the bike. I tried to increase the intensity to improve the muscles on this machine. I kept the speed constant. * Shuttle runs I increased the amount of reps I done again I changed them from 6, ten times to 7 ten times. ...read more.

* Shuttle runs For the last lot of shuttle runs I done I done them the same as the ones before which has been, 7 ten times. The activity lasted just under an hour Results from activity My heart rate after the shuttle runs was 167 beats per minutes, and my heart rate while working on the machines stayed in the aerobic zone. What did I find out from my results? What could I do next time? I found that from my results that I was working at the top of my aerobic zone. I found it better that I worked on the machines for longer because I felt like I was working harder which made me feel better. Session 3- a 1000 meter run (outside school) The activity consisted of: * A warm up For the warm up I completed my stretches, which I stretched all the muscles in the body and then I done a little exercise which raised my heart rate, Which consisted of sit ups and skipping. * The run For the run I jogged the 800 meters and then ran the last 200 meters of the run, which ended me up back home. * A cool down For the cool down I walked the same distance that I had done running, taking in deep breathes. The activity lasted about 30 minutes Results from activity My heart rate returned back to normal in 3 minutes after I had stopped running. I found the run very enjoyable, however I found it had to run the last 200-meters of the run, but I made it. What did I find from my results? What could I do next time? I found my results to be good and there isn't anything that I could do next time because this is the last week, but I wouldn't have changed the way I done the run this week any way. Cheryl Brassington ...read more.