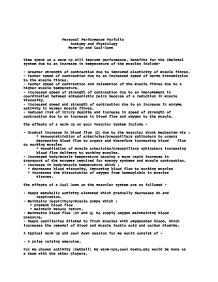 up to the second line,then back,then finally up to the other end of the court,then sprint back to bring in abit of competition. After repeating that two or three times, we'd begin to stretch. To stretch, we usually start from the neck downwards. We'd stretch the neck by looking up,then down,then from side to side.We'd then move to shoulder rolls,pulling the arm over the chest while keeping your arm straight and bending the elbow so your hand can touch the back of your shoulder,to stretch the shoulders and top of the arms. To stretch the hips we would do a hip roll in alternative ways. Wrist flicks and rolls loosen up the wrists and hands. A more practical way to loosen the hand and wrist would be to flick a netball using only your fingertips from hand to hand. We'd then stretch the top of the legs,hamstring,quadriceps and groins. A stretch could be to face both feet forward and one leg a pace infront of the other,then to lean forward and put all the pressure on the front leg.Another one would be to bend the knee and hold your foot by your gluteus maximus. ...read more.

The squad is divided into four and these four groups stand in the four corners of the center third. Two of the groups diagonally facing eachother have a ball. The remaining two groups (also facing eachother diagonally) are to receive the ball. The first player of each of the two groups receiving a pass run towards eachother and as they are about to recive the ball turn left and recieve from one of the feeders. This practice also helps spacial awareness but also coordination. The player's recieving the ball must be aware of the person their running to and the feeder. After this,we would go into a game situation for about half an hour as it is only a training session (matches usually last an hour). After the game, we'd start the cool down. This would be similar to the warm up but not as long or intense. We'd start with a gentle jog around the court for about 5mins whilst getting slower and slower so the body can recover. After stopping we'd stretch following the same routine as the warm up. This would decrease the risk on injury and would help prevent sore, tired muscles. ...read more.