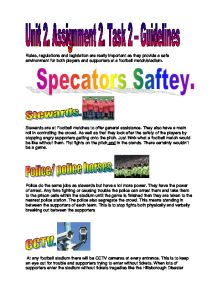 Rules, regulations and legislation are really important as they provide a safe environment for both players and supporters at a football match/stadium.

Rules, regulations and legislation are really important as they provide a safe environment for both players and supporters at a football match/stadium. Stewards are at Football matches to offer general assistance. They also have a main roll in controlling the crowd. As well as that they look after the safety of the players by stopping angry supporters getting onto the pitch. Just think what a football match would be like without them. Fist fights on the pitch and in the stands. There certainly wouldn't be a game. Police do the same jobs as stewards but have a lot more power. They have the power of arrest. Any fans fighting or causing trouble the police can arrest them and take them to the prison cells within the stadium until the game is finished then they are taken to the nearest police station. The police also segregate the crowd. This means standing in between the supporters of each team. This is to stop fights both physically and verbally breaking out between the supporters At any football stadium there will be CCTV cameras at every entrance. This is to keep an eye out for trouble and supporters trying to enter without tickets. When lots of supporters enter the stadium without tickets tragedies like the Hillsborough Disaster occur. On match day there are at least fifteen people employed to sit and watch screens showing CCTV footage. With these measures it is easy to stop fights and disasters before they happen. St John's ambulance is a voluntary ambulance service. They are at a football match to help any injured person whether it's the players for a muscle injury or a spectator after having a fit. The St Johns ambulance will help. As I mentioned before, crowd segregation is really important at a football match. The segregation is carried out by the police. Police officers surround the supporters to stop any physical or verbal abuse between rival supporters. ...read more.

They used advertising boards as make shift stretchers and tried to resuscitate the injured. Only 14 out of the 96 victims made it to a hospital. Afterwards both police and fans were accused of causing the disaster. The Police View South Yorkshire police blamed fans for being late, ticketless and unruly as the cause for their decision to open gate C. Police federation officer Paul Middup told ITV news "more than 500 ticketless fans were h**l bent on getting in." Bernard Ingham, press secretary to the prime minister also accused Liverpool fans. He said "there would have been no disaster if a mob hadn't tried to force their way into the ground." The allegations were based on comments made in the midst of the tragedy. Chief superintendant David Duckenfield said supporters forced open the gate. BBC TV recording outside the ground proved police opened the gate. Duckenfield had lied ! The Supporters View The supporters blame the disaster on the lack of police control. Fans refer to the findings in the Taylor report which dismisses all allegations against them. The report also criticizes the FA and SWFC for the ill suited ground with poor signposts and a confusing layout. SWFC were also critisised for not keeping an up-to-date safety certificate for the ground. The Taylor report main findings are one of police responsibility for not taking effective control. * 94 people died on the day of the disaster. * Four days later, the death toll reached 95 when 14-year-old Lee Nicol died in hospital from his injuries. * The final death toll became 96 in March 1993, when Tony Bland died after remaining in a coma for nearly four years. *In August 1989 Lord Justice Taylor's interim report was published. The main recommendations of the report were:- * The closure of terraces and introduction of seating in all football grounds. * New safety measures imposed on exits and entrances. * A new advisory to be Committee be set up to ensure best stadium design. ...read more.

of material beyond a site boundary, injury caused by an explosion;Accidental release of a biological agent likely to cause severe human illness; _ Failure of industrial radiography or irradiation equipment to de-energise or return to its safe position after the intended exposure period; _ Malfunction of breathing apparatus while in use or during testing immediately before use; _ Failure or endangering of diving equipment, the trapping of a diver, an explosion near a diver, or an uncontrolled ascent; _ Collapse or partial collapse of a scaffold over five metres high, or erected near water where there could be a risk of drowning after a fall; _ Unintended collision of a train with any vehicle; _ Dangerous occurrence at a well (other than a water well); _ Dangerous occurrence at a pipeline; _ Failure of any load-bearing fairground equipment, or derailment or unintended collision of cars or trains; _ A road tanker carrying a dangerous substance overturns, suffers serious damage, catches fire or the substance is released; _ A dangerous substance being conveyed by road is involved in a fire or released; _ The following dangerous occurrences are reportable except in relation to offshore workplaces: unintended collapse of: any building or structure under construction, alteration or demolition where over five tonnes of material falls; a wall or floor in a place of work; any false-work; _ Explosion or fire causing suspension of normal work for over 24 hours; _ Sudden, uncontrolled release in a building of: 100 kg or more of flammable liquid; 10 kg of flammable liquid above its boiling point; 10 kg or more of flammable gas; or of 500 kg of these substances if the release is in the open air; _ Accidental release of any substance which may damage health. RIDDOR effects a match day at St James' Park by any incident having to be reported to the authorities if there is an accident related to the place of work which in this case is the stadium. ?? ?? ?? ?? ...read more.