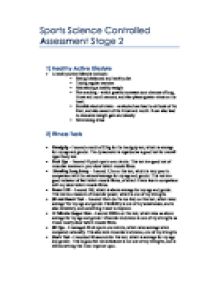 Sports Science Controlled Assessment - analysisng my health and fitness. How I can improve.

Summary * In general I don't eat too much and I have a balanced, healthy diet. However, I often don't drink enough water, and sometimes don't have enough fruit and vegetables, sometimes none at all. These are two things that I need to improve upon as they both affect me during the day, especially water, which greatly changes my concentration levels. 6) Exercise Analysis * There are a number of ways in which exercise can affect or induce a response from the body, both in the short term and long term. * For example, the short term effects include: * Anticipatory rise - levels of certain hormones rise sharply when triggered by stimuli from the sensory organs * Heart rate increases, but this stays high during activity * The long term effects are much more substantial and include: * Increase in bone density, strengthening them and making the healthier. * Increase in capillary density and efficiency, meaning that oxygen can be supplied to the muscles quicker and more efficiently. * Lower resting heart rate, which enables the body to exercise at a higher intensity and for longer periods of time. * Increased vital capacity, which enables the uptake of more oxygen and therefore higher levels of energy throughout the day. * Increase in stroke volume at rest and during exercise, enabling the muscles to receive more oxygen. * Increase in cardiac output, once again increasing energy levels. * Decrease in blood pressure at rest, which helps prevent disease. * Increase in haemoglobin levels, which allows more efficient transfer of oxygen into the blood. * The ability to work for longer at higher intensities. * I do almost an hour of exercise per day, as is recommended for a boy of my age. * However, on Sundays I rest to avoid injury. * Although I do enough exercise per week, the intensity at which I do the exercise is often not high enough. ...read more.

However, I could also use the S.P.O.R.T and F.I.T.T principles to improve my training for these fitness tests. Criteria by Which Improvement Will Be Judged * So that I could track of any improvements to my lifestyle that may have been made, I would record a number of different aspects to do with my lifestyle. * For weakness number one, for example, I would keep a diary documenting all of the water that I had consumed over a one-week period. Then I would see if I had met the recommended 2.5 litres per day. If I had, I could then assume that I had improved and I would no longer keep a diary. However, if I had not met the recommended amount of water per day then I would continue to keep the diary until an improvement is made. * I would do a similar thing to that of my first weakness for my second and third weaknesses, and I would keep a food diary. In this way, I could look back on the past week and see if I had met my goals and improved, and then I could stop keeping track of what I was eating in the assumption that I would continue to eat healthily. If I found that I started to make the same mistakes again, I would start keeping the food diary again. * For my fourth weakness, I could do a similar thing as per above and keep a diary for my sleep patterns and note any improvements from that. However, I could also ask my family to help me to get up on time and to go to bed on time. * My sixth and seventh weaknesses are also linked, as if I am to improve my fitness test results efficiently I need to use the S.P.O.R.T and F.I.T.T principles of training, and therefore I am improving my sixth weakness. To improve my fitness test results I would have to increase the amount of training I would need to do, and to train efficiently I should use the principles of training. ...read more.