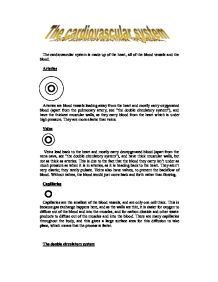 The cardiovascular system is made up of the heart, all of the blood vessels and the blood. Arteries Arteries are blood vessels leading away from the heart and mostly carry oxygenated blood (apart from the pulmonary artery, see "the double circulatory system"), and have the thickest muscular walls, as they carry blood from the heart which is under high pressure. They are more elastic than veins. Veins Veins lead back to the heart and mostly carry deoxygenated blood (apart from the vena cava, see "the double circulatory system"), and have thick muscular walls, but not as thick as arteries. This is due to the fact that the blood they carry isn't under as much pressure as when it is in arteries, as it is heading back to the heart. They aren't very elastic; they rarely pulsate. Veins also have valves, to prevent the backflow of blood. ...read more.

The flow of blood is continuous, but to explain the process, I will begin at the right atrium. At this point, the blood is deoxygenated. It passes through the tricuspid valve and into the right ventricle, where it is pumped through the semi lunar valves and the pulmonary artery to the lungs, where it deposits waste products and picks up oxygen. Now oxygenated, it travels through the pulmonary vein into the left atrium and through the bicuspid valves into the left ventricle. The wall of the left ventricle is much thicker than the wall of the right, as it has to pump blood under higher pressure to the rest of the body. The blood passes through another set of semi lunar valves and out of the aorta (the largest artery in the body) and to the rest of the body, where it loses oxygen to the muscles and takes away any waste products. ...read more.

People who actively smoke cigarettes not only put themselves at risk, but also cause a hazard to people around them with passive smoking. The composition of blood Blood does not only carry oxygen and waste, but also acts as a defence against illness and injury. It is composed of: > Red Blood Cells - Carry oxygen by bonding with it to form oxyhaemoglobin. Haemoglobin gives them their red colour, and altitude training or blood doping (which is banned) increases the red blood cell count. > White Blood Cells - Fight disease by engulfing pathogens, or producing antibodies to kill them. > Platelets - Help to clot blood, and repair torn blood vessels; they rush to the site of injury when you are hurt. Haemophilia is the best known of clotting diseases, which is when the body has a lack of clotting agents. > Plasma - This is 90% water, and transports salts, hormones and nutrients. 55% of blood is plasma, and 45% is made of red and white blood cells and platelets. ...read more.